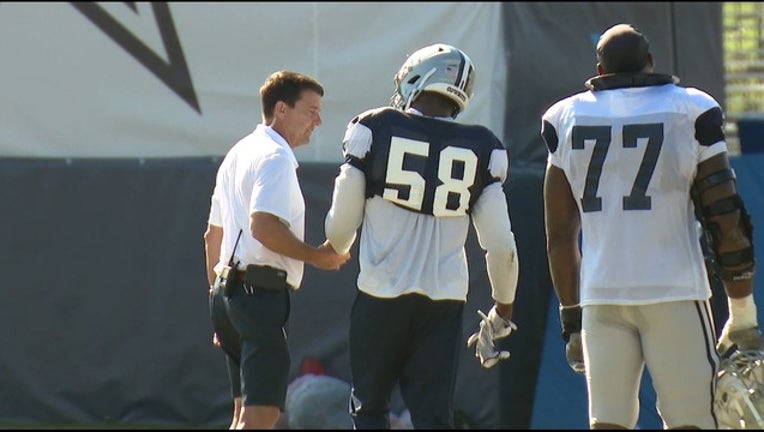 OXNARD, Calif. (AP) - Dallas Cowboys defensive end Robert Quinn fractured his left hand in practice at training camp and is expected to miss the rest of the preseason.

Quinn sustained the injury during a one-on-one pass rushing drill against star left tackle Tyron Smith on Tuesday. Executive vice president of personnel Stephen Jones said Quinn was returning to Dallas for surgery, but should be ready for the opener Sept. 8 against the New York Giants.

The Cowboys traded for Quinn in the offseason, signing him to an $8 million, one-year deal while sending a sixth-round pick in next year's draft to the Dolphins.

The injury means Dallas is likely to be without both starting defensive ends until the regular season. DeMarcus Lawrence, who signed a $105 million, five-year deal in the offseason, isn't expected to practice or play in the preseason coming off shoulder surgery.

With Randy Gregory suspended indefinitely, Quinn is expected to start at right defensive end opposite Lawrence. Gregory is planning to seek reinstatement, and the Cowboys are optimistic he will be available at some point during the season.

The 29-year-old Quinn has 69 sacks in eight seasons, but his previous double-digit sack season was five years ago.