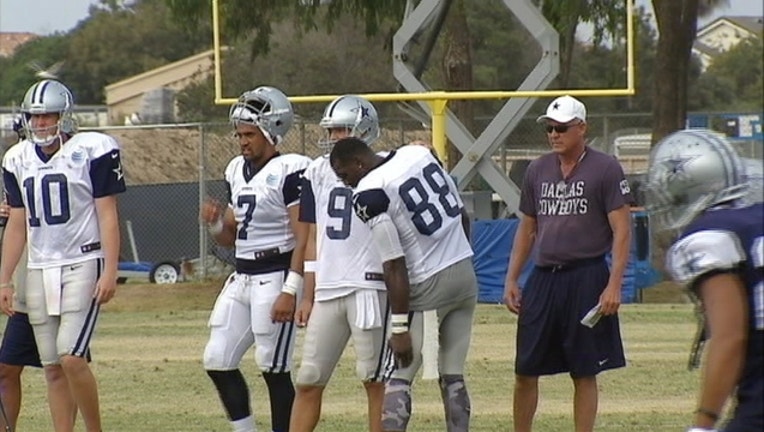 OXNARD, Calif. (AP) — Dallas coach Jason Garrett still wasn't in a talkative mood two days after a lackluster preseason game in San Francisco that left the Cowboys with just one decent chance to get tuned up for the regular season.

Garrett said receiver Dez Bryant would go through individual drills in the afternoon practice Tuesday, the first of three workouts before Dallas breaks camp ahead of its first preseason home game Saturday night against Minnesota.

The All-Pro receiver hasn't been a full participant in practice since Aug. 2 because of a hamstring injury. He missed the offseason in a contract stalemate with the team.

The game against the Vikings is likely Bryant's only chance to get on the field with quarterback Tony Romo before the season opener for the defending NFC East champs Sept. 13 at home against the New York Giants.

"A little more today, getting involved in individual and see how he does and how he responds to that," Garrett said.

The coach's responses were that terse on many topics after the Cowboys had a rough night on offense and special teams in a 23-6 loss to the 49ers.

Playing mostly with backups, the offensive line struggled to create space for running backs or protect the quarterback. The punt coverage unit gave up 105 yards on four returns and had another punt blocked for a touchdown.

There were some bright spots for the defense in keeping the 49ers out of the end zone and finishing with three sacks, but Colin Kaepernick easily led San Francisco to a field goal on the first of his two possessions.

"I feel like the defense played well," said defensive tackle Tyrone Crawford, who missed the game but is set to return from a back injury. "Definitely some things we need to do better, a lot better, but we played well for the most part. But it's a team sport and we take hurt for all of it."

Quarterback Brandon Weeden and safety Jeff Heath, both backups, haven't been cleared after sustaining concussions against the 49ers.

With Romo likely to take most of the first half and perhaps more against the Vikings after getting just three plays total in the first two games, Weeden could sit. That could leave the rest of the game to Dustin Vaughan and rookie Jameill Showers, who are battling for the No. 3 job.

"Have to be smart," said Weeden, who made one start in the regular season last year when Romo was out with a back injury. "I am 31 years old and I don't want to be 50 and not able to remember my kids' names. To me that's a lot more important than trying to play it out for one more series of a preseason game. It's not worth it."

Garrett bristled at the suggestion that the Cowboys had a sudden sense of urgency after a bad game in San Francisco leading into the most important exhibition game.

Besides Bryant, several starters who have missed both preseason games could return to practice this week and therefore be available against the Vikings: left tackle Tyron Smith (arm muscle); cornerbacks Orlando Scandrick (knee) and Brandon Carr (hand); and linebacker Sean Lee.