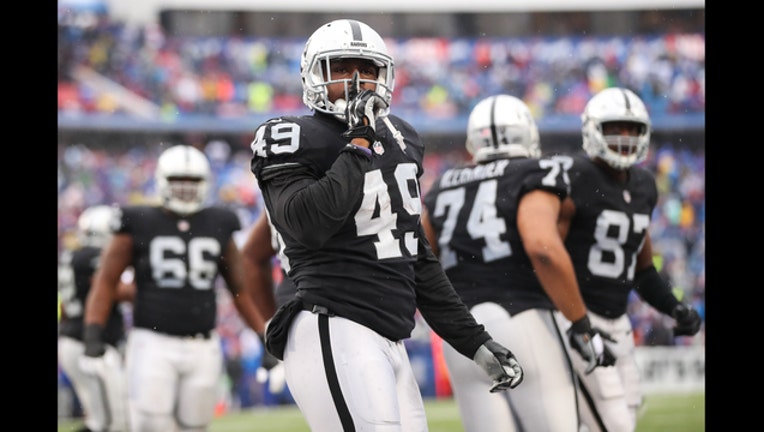 ORCHARD PARK, NY - OCTOBER 29: Jamize Olawale #49 of the Raiders celebrates after scoring a touchdown during the first quarter of an NFL game against the Buffalo Bills on October 29, 2017 at New Era Field. (Photo by Tom Szczerbowski/Getty Images)

FRISCO, Texas (AP) - The Oakland Raiders have traded fullback Jamize Olawale to the Dallas Cowboys in a deal that also includes a swap of picks in the upcoming NFL draft.

Dallas sent Oakland one of its two fifth-round picks (No. 173 overall) in exchange for a sixth-round pick (No. 192 overall). The Cowboys now have three picks in the sixth round.

Olawale went to training camp with the Cowboys in 2012 and was on their practice squad before going to the Raiders and making his NFL debut by playing in the last three games that season. He has played in 77 career games.

The deal announced Tuesday came only five days after fullback Keith Smith left the Cowboys to sign a two-year deal with the Raiders.

This story has been corrected to show the swap of draft picks.