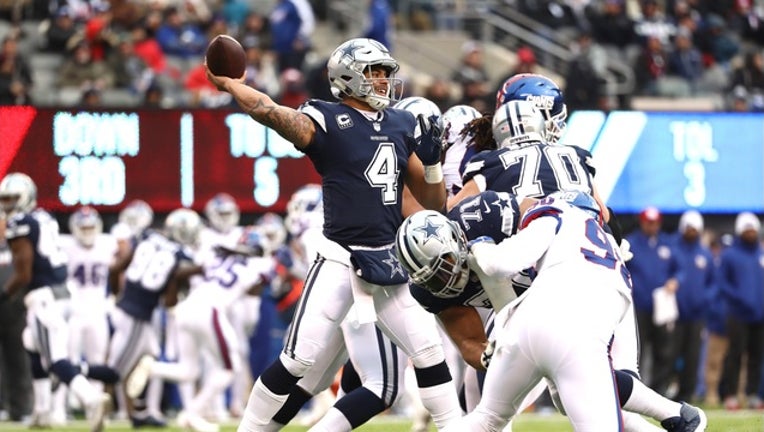 Dak Prescott #4 of the Dallas Cowboys looks to throw a pass against the New York Giants during the third quarter in the game at MetLife Stadium on December 10, 2017 in East Rutherford, New Jersey. (Photo by Elsa/Getty Images)

For the first time since 2012, the Dallas Cowboys will open their season on the road.

The NFL schedules were released Thursday night. It shows the Cowboys season beginning on FOX 4 on Sept. 9 at Carolina against the Panthers, the team that went 11-5 last year.

Dallas will face the New York Giants at a home game on Sunday night in Week 2.

The Cowboys will then take a trip to Seattle to face the Seahawks on Sep. 23. They’ll then face the Detroit Lions at home in Week 4.

Dallas will go against the Houston Texas in another Sunday night game on Oct. 7. The next week, they’ll face the Jacksonville Jaguars at home, a team that made the playoffs last year.

The Cowboys will take a trip to play the Washington Redskins on Oct. 21 before the Bye Week.

After that, Dallas will face the Tennessee Titans on Nov. 5, a team that won a playoff game last year.

The Cowboys play last year's Super Bowl champs, the Philadelphia Eagles, twice in five weeks. Their first match will be on the on the road Sunday night on Nov. 11 and again on Dec. 9.

For the first time this year, FOX will televise 11 Thursday night games starting in Week 4.

The Cowboys are trying to bounce back from a 9-7 season that saw Dallas missing the playoffs.