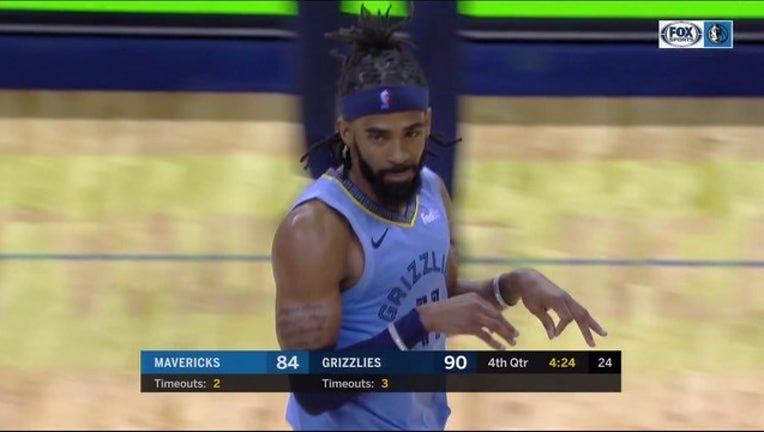 Jaren Jackson Jr. finished with 13 points and Garrett Temple added 12 as Memphis won its fourth straight and sixth in the last seven.

Dennis Smith Jr. led the Mavericks with 19 points and five assists. DeAndre Jordan added 17 points and a season-high 20 rebounds. Luka Doncic had 15 points and 10 rebounds but was 6 of 20 from the field, part of Dallas shooting 34 percent.

The loss snapped Dallas' four-game winning streak, and the Mavericks were held under 100 points for the first time this season.

The game had 17 lead changes and 15 ties, the last one coming with 5:41 left on a floater in the lane by Dallas reserve Jalen Brunson.

Memphis reeled off 10 straight points for the biggest lead for either team in the game. Temple and Conley each converted 3-pointers in the stretch that gave Memphis the lead for good.

Memphis led 53-49 at the half as Conley and Jackson each scored 11 points. Dorian Finney-Smith had 11 points for Dallas, in part from missing only one of his four shots from outside the arc in the first half.

The game was tight throughout the first half and stretching through the third quarter with the teams tied at 74 entering the fourth.

Grizzlies: Conley converted a 4-point play in the closing seconds of the first half. ... Gasol had eight rebounds in the first quarter. His 15 for the game was a season high. ... Gasol, who entered the game having made 12 of 25 3-pointers over the last three games, missed all five of his shots from outside the arc.

Grizzlies: Travel to San Antonio to face the Spurs on Wednesday night.