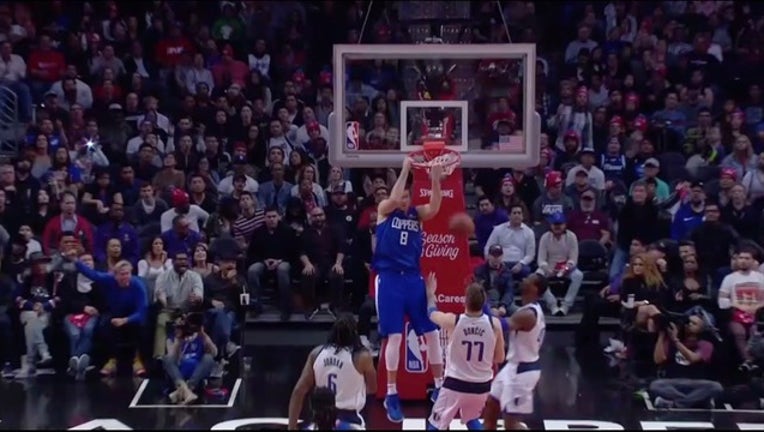 Rookie Luka Doncic scored a season-high 32 points for the Mavericks and JJ Barea added 19. DeAndre Jordan had 11 points and 22 rebounds in his first game back at Staples Center against his former team.

Dallas trailed 89-82 at the start of the fourth quarter before scoring eight straight points to take the lead, with six coming from Devin Harris. That would be the first of six lead changes and four ties over the final 10 minutes.

Maxi Kieber's jumper put the Mavericks up 109-104 with 5:14 remaining before the Clippers regained control with a 15-2 run. A pair of free throws by Gallinari tied it at 111 and was part of a run of 12 straight points that gave Los Angeles an eight-point lead with 1:02 remaining.

Dallas, which has dropped its last four, made a late run to get within 123-121 but Tobias Harris made a pair of free throws to ice it.

Los Angeles led 32-30 early in the second quarter before scoring seven straight points. The Clippers would lead by as many as 13 late in the quarter before going to halftime up 65-54.

Dallas trailed 69-58 less than three minutes into the third quarter before it started to steadily whittle down the deficit. Doncic scored six points during an 8-1 run that got the Mavericks within four. Devin Harris' layup with 1:14 remaining drew the Mavericks within 85-82 before the Clippers scored the final four points of the quarter.

The Clippers played a video thanking Jordan for his nine seasons with the franchise during the first timeout.

It was Jordan's third game in Staples Center this season, but this was the first time it came against his former club. Jordan, who opted out of his contract with the Clippers during the offseason and signed a one-year deal with Dallas, holds the Clippers' record for most games played, field goal percentage, rebounds and blocked shots.