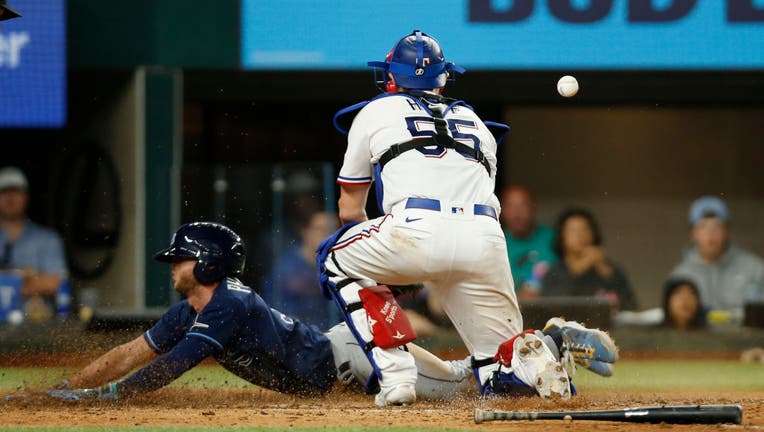 ARLINGTON, TEXAS - JUNE 01: Brett Phillips #35 of the Tampa Bay Rays scores a run on a sacrifice fly ahead of the throw to Sam Huff #55 of the Texas Rangers in the 10th inning at Globe Life Field on June 01, 2022 in Arlington, Texas. (Photo by Tim He

ARLINGTON, Texas - Ji-Man Choi had a disputed checked-swing strike that led to his manager's ejection, then a big swing-and-miss when his helmet flew off his head. That at-bat ended with an RBI double that put Tampa Bay ahead to stay.

Choi thought he had checked his swing on a pitch in the dirt. Manager Kevin Cash reacted as well from the dugout and was tossed by home plate umpire Vic Carapazza, who called the strike without seeking any help.

"It's a big at-bat right there. It’s a big pitch. It’s a big swing momentum in favor of the pitcher," Cash said. "They’re tough calls, there’s no denying that. Just felt like there could have been a look or an ask down to the third base umpire."

Choi then took a ball from Dennis Santana (2-2) before the swing-and-miss and then double into the right-field corner.

No. 9 batter Vidal Bruján hit a sacrifice fly in the Tampa Bay 10th. His single in the second had ended a streak of 30 consecutive Rays batters retired since the second inning of their 3-0 loss on Tuesday night.

"We have scuffled ... but like the way the guys stayed at it," Cash said. "It’s very easy to get frustrated and kind of get consumed in that frustration and not doing anything."

The Rangers got even on an RBI single by Adolis Garcia in the bottom of the 10th, but then left the bases loaded when rookie Zach Reks flew out to left. The Rangers left 14 runners on base.

"We need to have better at-bats," manager Chris Woodward said. "We can’t get caught in the moment, try to be the hero. Like, just a quality at-bat, know what you want to do up there and follow through with that. And I felt like we let that slip a little bit, especially late."

Jon Gray struck out a season-high 12 batters over seven innings and exited with a 2-1 lead for Texas (24—25), which reached .500 for the first time this season with its win Tuesday.

Randy Arozarena went deep for the Rays, and Harold Ramirez had a tying pinch-hit RBI single in the eighth.

Lefty Colin Poche (1-0), the sixth Rays pitcher, struck out two in the 10th before Matt Wisler pitched the 11th for his first save in three chances.

Right before Arozarena homered, Yandy Díaz had led off the Rays seventh with a hit that Kole Calhoun picked up near the right-field corner.

The 30 consecutive Rays batters retired were the equivalent of a 10-inning perfect game. A trio of Rangers pitcher got out the last 22 Tampa Bay batters Tuesday night. The last major league team to retire 30 batters in a row had been Toronto — also against Tampa Bay — in July 2019. Texas hadn’t done that since getting out 33 consecutive Oakland batters in June 2016.

Rangers 2B Marcus Semien, who entered with a five-game hitting streak and a season-high .199 average, missed a chance to get above .200. He went 0 for 6 with three strikeouts, slipping to .193. ... Rays starter Jeffrey Springs struck out seven in five innings, the only runs he allowed coming on the two solo homers.

Rays: Catcher René Pinto was added to the taxi squad, but there was no roster move before the game after manager Cash said catchers Francisco Mejia and Mike Zunino were both "banged up" a bit.

Rangers: LHP Martin Perez, the MLB leader with his 1.42 ERA, worked out and felt fine a day after taking a liner off his right leg. He retired all 16 batters he faced after being struck.

Two-time AL Cy Young Award winner Corey Kluber pitched only one inning for Texas during his only season with the Rangers in 2020. The right-hander threw a no-hitter against them last year when starting for the New York Yankees. Kluber (1-2, 4.03 ERA) now starts the finale of the four-game series for the Rays against Texas lefty Taylor Hearn (3-3, 5.36).