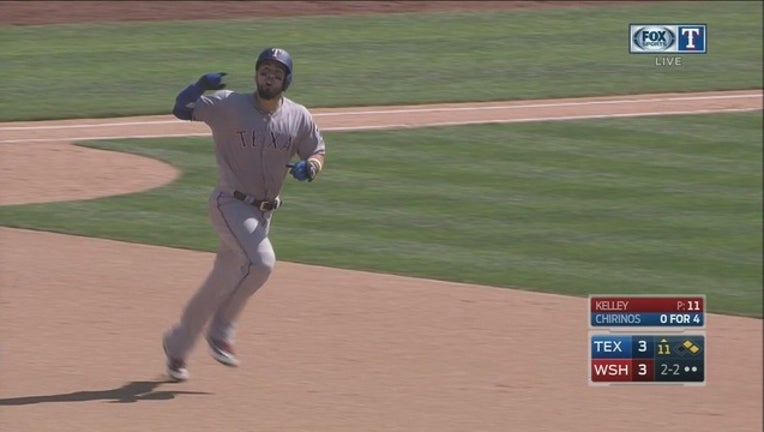 WASHINGTON (AP) - Robinson Chirinos nearly put Texas ahead during a ninth-inning rally that tied it, then hit a three-run homer in the 11th that sent the Rangers over the Washington Nationals 6-3 on Saturday.

Texas scored twice in the ninth to make it 3-all. Chirinos' bid for a tiebreaking sacrifice fly was thwarted by Washington right fielder Bryce Harper, who made a strong throw to nail a runner at the plate.

Washington almost won it in the bottom of the ninth. With two outs, Trea Turner bunted with a man at third, but pinch-runner Wilmer Difo hesitated going home and was quickly tagged out.

Pinch-hitter Joey Gallo doubled with two outs in the Texas 11th off Shawn Kelley (3-2). Following an intentional walk to Nomar Mazara, Chirinos drove a fastball just over the left-field wall.

Keone Kela (3-1) went two innings as the below-.500 Rangers beat the NL East leaders for the second straight day.

The loss was the latest stumble for Washington's shaky late-inning relief corps. Glover's second blown save was the 10th for Washington this season.

Shin-Soo Choo's leadoff homer in the ninth pulled Texas within a run, and Nomar Mazara's RBI double off closer Koda Glover tied it. Pinch-runner Pete Kozma later tried to score on Chirinos' fly, but was out after a replay review reversed the original call.

Adam Lind homered during a three-run sixth inning that began with Harper's double. Harper went 1 for 4 with a walk batting second after hitting third in each of his previous 52 games this season.

Texas starter Martin Perez blanked the Nationals until they struck in the sixth.

Rangers: 3B Adrian Beltre (ankle) finished 1 for 3 with a walk and stolen base in his return to the Rangers lineup. ... RHP Tyson Ross (Thoracic Outlet Syndrome surgery) allowed eight runs and 10 hits over five innings in his fourth rehab start for Triple-A Friday night. He will join the Rangers for their next series in Houston and discuss a plan with the organization, manager Jeff Banister said.

Nationals: 1B Ryan Zimmerman was not in the starting lineup for the 12:05 p.m. start following a night game. Zimmerman leads the NL with a .365 batting average.

Rangers: Banister wouldn't commit to a Sunday starter before Saturday's game, but said RHP Austin Bibens-Dirkx (1-0, 4.08) is the leading candidate.