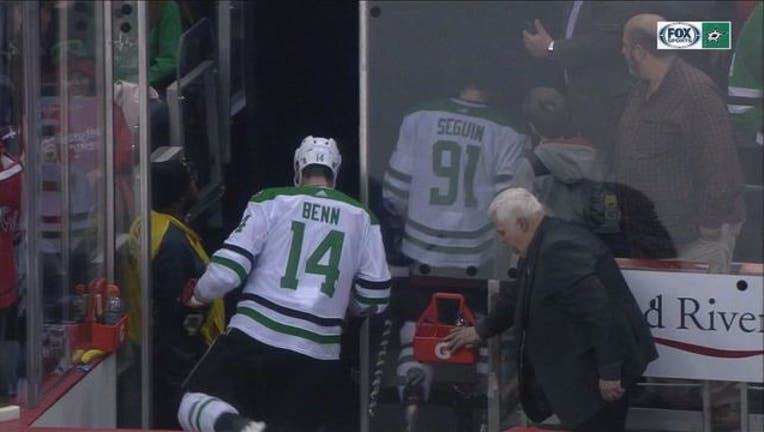 WASHINGTON (AP) - John Carlson scored the go-ahead goal with five minutes remaining to help the Washington Capitals beat the Dallas Stars 4-3 on Tuesday night and extend their lead atop the Metropolitan Division.

T.J. Oshie, Matt Niskanen and Alex Ovechkin also scored for Washington, which leads the tight Metropolitan by four points over Pittsburgh and Columbus. The Capitals are on pace for their third consecutive division title and playoff appearance with nine games remaining.

Carlson's goal tied him with the Stars' John Klingberg for the NHL lead among defensemen with 61 points. It was also a dagger to Dallas' fading playoff hopes. The Stars finished their road trip 0-4-2 and sit outside the final playoff position in the Western Conference and could need 14 of a possible 18 points before the end of the season to get in.

Braden Holtby stopped 24 of the 27 shots he faced to beat the Stars for just the second time in six career starts, a fine performance as the 2016 Vezina Trophy winner tries to get his game together before the playoffs. Kari Lehtonen, who could be counted on to start every game for Dallas down the stretch with Ben Bishop out, allowed four goals on 32 shots in the loss that included goals from Tyler Seguin, Jamie Benn and Alexander Radulov.

A sluggish first period took a turn about 15 minutes in when Washington's Nicklas Backstrom tripped fellow Swede Klingberg to put Dallas on the power play. With the Capitals converging on the puck at the blue line, Seguin was left wide open and scored his 39th goal of the season 16:04 in.

Two more Capitals penalties gave the Stars opportunities to build the lead, but when they couldn't - and Washington had better short-handed chances than it gave up on the power play - it was 1-1 at 4:07 of the second on Oshie's 16th. Washington took the lead less than 90 seconds later on Niskanen's harmless-looking point shot that deflected off Stars defenseman Greg Pateryn's raised stick and past Lehtonen.

As good as the Capitals' penalty kill was in the second period, the Stars scored seconds after a power play expired as Radulov deflected Klingberg's shot into the net at 11:48. Klingberg's 61 points are the most among NHL defensemen.

Ovechkin continued the back-and-forth scoring on the power play 14:31 into the second, his league-leading 44th goal this season and 602nd of his career to pass Jari Kurri for sole possession of 19th on the career list. It was his 22nd career goal against Lehtonen, tied for the most against any goalie with the New York Rangers' Henrik Lundqvist.

A turnover by Washington's Lars Eller paved the way for Benn to tie the score again at 18:15 when he muscled by a defender to the net and waited out Holtby to score his 27th of the season.

Carlson scored with 4:59 left to put the Capitals up and almost end the Stars' season.

NOTES: Eller was benched for more than eight minutes after his giveaway. ... Capitals D Brooks Orpik returned after missing one game with a lower-body injury. C Evgeny Kuznetsov missed his second consecutive game with an upper-body injury. ... Stars D Marc Methot missed his fourth game in a row with a hand injury, while RW Brett Ritchie (lower body) and C Jason Spezza (back) were also out.

Stars: Return home to face the Boston Bruins on Friday.