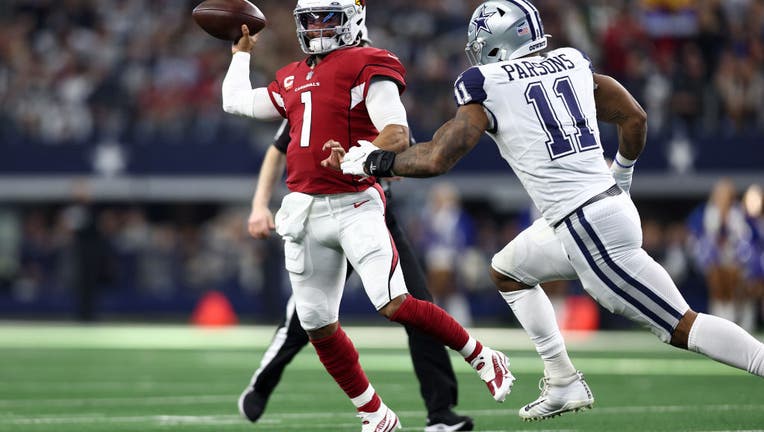 ARLINGTON, TEXAS - JANUARY 02: Kyler Murray #1 of the Arizona Cardinals throws the ball while under pressure by Micah Parsons #11 of the Dallas Cowboys during the first quarter at AT&amp;T Stadium on January 02, 2022 in Arlington, Texas. (Photo b

ARLINGTON, Texas (AP) - Kyler Murray threw two touchdown passes to Antoine Wesley and the Arizona Cardinals held on to beat the Dallas Cowboys 25-22 in a matchup of playoff-bound teams Sunday.

The outcome didn't do much to change the races for the NFC's No. 1 seed or the NFC West, but the Cardinals ended a three-game skid a week after backing into the postseason while stopping the NFC East champion's four-game winning streak.

Murray improved to 8-0 as a starter at the home of the Cowboys. Most of those victories were as a Texas high school playoff star, but the past two have been as a pro after last season's 38-10 rout.

The Cardinals (11-5) are still a game behind the Los Angeles Rams in their division with LA rallying to beat Baltimore 20-19.

Arizona pulled even with the Cowboys (11-5) while leaving both teams a Green Bay victory away from elimination for the NFC's first-round bye. The Packers played Minnesota later on Sunday.

The Cardinals' victory over Dallas in 2020 was the first game after Dak Prescott's season-ending ankle injury. The star quarterback's presence was felt in a fourth-quarter comeback that fell short.

Dallas was out of timeouts and couldn't challenge when officials ruled Chase Edmonds down near the sideline when the ball came out and was recovered by Osa Odighizuwa before the two-minute warning. It appeared possible the call could have been overturned. 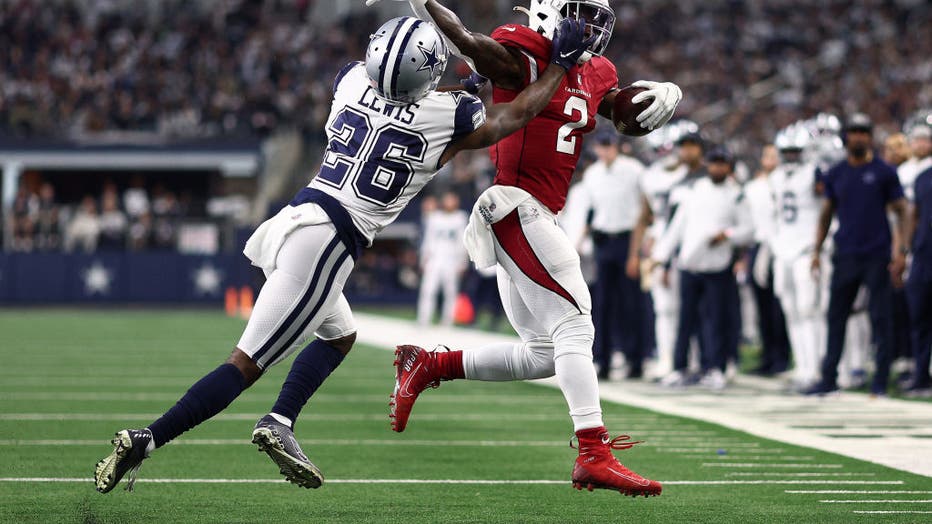 ARLINGTON, TEXAS - JANUARY 02: Chase Edmonds #2 of the Arizona Cardinals runs the ball and looks to break a tackle by Jourdan Lewis #26 of the Dallas Cowboys during the first half at AT&amp;T Stadium on January 02, 2022 in Arlington, Texas. (Phot

The Cardinals reached 25 points for just the second time in seven games, sparked this time by a successful fake punt in the second quarter when Jonathan Ward made an improbable catch of upback Chris Banjo's throw. A pass interference penalty would have made it a first down anyway.

The trickery and another interference flag on third down led to Murray's 1-yard toss to Wesley on fourth down. The pair connected again from 19 yards in the third quarter for a 19-7 lead.

The Cowboys were the healthiest they've been all season coming in, but lost receiver Michael Gallup to a left knee injury on his 21-yard TD catch for their first points late in the first half.

Murray was 26 of 38 for 263 yards and two touchdowns while Prescott finished 24 of 38 for 226 yards with a lost fumble when the Cowboys were down eight early in the fourth quarter.

Prescott's fumble set up a short drive to the last of Matt Prater's four field goals for a 25-14 lead.

Wesley had four catches for 30 yards, while Christian Kirk (43 yards) and A.J. Green (42) each had a long catch to set up scores.

The Cardinals shut down the struggling Dallas running game, holding Ezekiel Elliott to 16 yards on nine carries. Prescott was the leading Dallas rusher with 20 yards.

The regular-season finales for both teams next Sunday. Arizona is home against Seattle. Dallas visits Philadelphia.