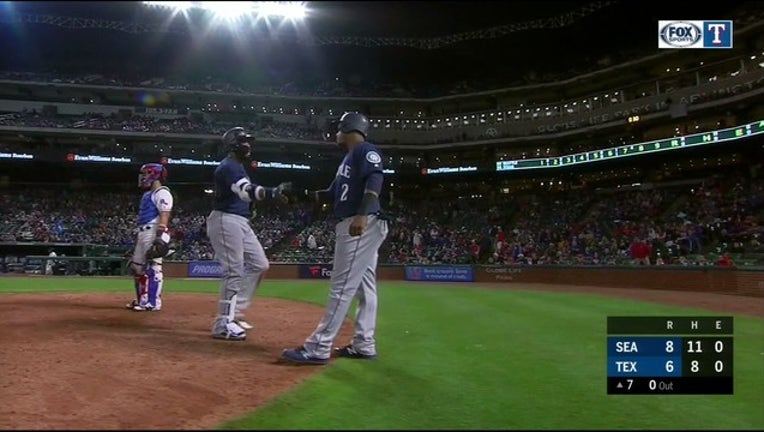 ARLINGTON, Texas (AP) - Nelson Cruz homered for the 100th time at his former home, Robinson Cano hit a tiebreaking shot and the Seattle Mariners held on for a 9-7 win over the Texas Rangers on Saturday night.

Cano's two-run homer in the seventh made it 8-6 and capped a four-run outburst against reliever Alex Claudio (0-1), who gave up hits to all four batters he faced. Mitch Haniger also went deep later in the inning against Chris Martin.

Cruz hit a two-run home estimated at 453 feet in the fourth, which came one pitch after another towering drive down the left-field line was ruled foul - and stayed that way after an umpire replay review. Of his 100 homers at the Rangers ballpark, 92 came when Cruz played for Texas from 2006-13.

Seattle's comeback spoiled 44-year-old Bartolo Colon's bid for his first win with the Rangers, and 21st in his career against the Mariners. Colon, who covered first base for the first two outs in the fifth, exited after 5 2/3 innings with a 5-4 lead.

Chasen Bradford (2-0) pitched two innings in relief of Seattle starter James Paxton, who struck out six but gave up five runs in four innings. Edwin Diaz got the final four outs for his AL-leading eighth save even while walking three batters and giving up a run in the ninth.

Texas, which lost the opener of the three-game set 6-2 Friday after giving up a four-run ninth, has lost its first four home series. The Rangers are 2-10 at home, including six straight losses.

Colon retired the first 21 batters at Houston in his previous start six nights earlier. He never flirted with perfection against the Mariners after Dee Gordon singled to lead off the game after the start was delayed 1 hour, 25 minutes because of rain.

But the speedy Gordon was retired on a 3-1 putout in the fifth, a batter after Colon also covered first base to get out Ben Gamel.

Mariners: INF Ryon Healy (sprained right ankle) did some early work Saturday during his rehab at Double-A Arkansas after homering in Friday night's game. He could be back with the Mariners within a few days.

Rangers: CF Delino DeShields was the DH for Double-A Frisco on Saturday night to get some more at-bats. Manager Jeff Banister said DeShields, out since March 31, still has some soreness in his left hand since having a broken hamate bone removed.

Seattle is expected to activate Erasmo Ramirez from the 10-day disabled list (strained right lat) for his season debut in the series finale. Marin Perez (1-2, 13.14 ERA), who has allowed at least nine hits in all three of his starts, takes the mound for the Rangers.