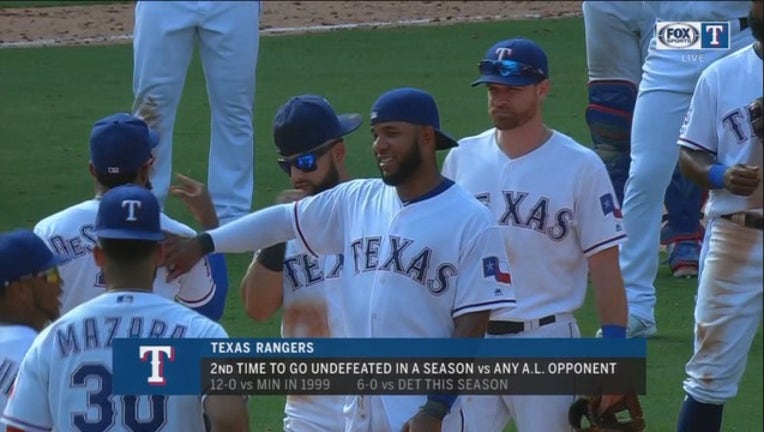 Calhoun hit a tiebreaking three-run triple in the seventh inning, and Texas beat the Detroit Tigers 9-4 on Sunday to finish a three-game sweep.

The Rangers had runners on the corners with two out in the seventh when Tigers manager Ron Gardenhire replaced José Cisnero (0-3) with Nick Ramirez.

Mazara and Calhoun were both hitting .200 against lefties, and Mazara was benched the previous three games against lefty starters. But Woodward sent them to the plate anyway.

Mazara worked a walk from a 1-2 count before Calhoun pulled a 2-0 pitch just inside the right-field line. Calhoun later scored on a wild pitch.

"For (Mazara) to be able to fight back and see that many pitches kind of like set it up for me," said Calhoun, who is hitting .303 since being recalled from Triple-A Nashville on July 25. "Against a lefty, it's nice to be able to square him up pretty good."

Rafael Montero (1-0) closed with 2 1/3 scoreless innings for his first major league win since September 2017 with the New York Mets. Texas' four-game win streak is its longest since a six-game streak in late June.

Detroit right-hander Jordan Zimmermann permitted four runs and six hits in six innings. He was trying to win for the second straight time after going 0-8 in his first 13 starts of the season.

Zimmermann had retired eight straight batters and was working with a 3-2 lead with one out in the fifth when Shin-Soo Choo hit a liner back to the mound. Zimmermann spun to his left and dropped to the dirt as the ball skimmed off the top of his glove for a hit.

"I was fine," Zimmermann said. "(Trainer Doug) Teter came out there, made sure everything was good."

The next batter was Danny Santana, who hit a 2-2 slider into the seats in right.

Rangers right-hander Emmanuel Clase pitched 1 2/3 innings of no-hit relief in an impressive major league debut. Clase struck out one and walked one. Ten of his 25 pitches hit double digits according to MLB.com, topped by 101.1.

Clase's contract was selected from Double-A Frisco on Friday. He had a combined 50 strikeouts in 44 2/3 innings this season with Frisco and High-A Down East.

Woodward said he was particularly impressed with Clase's demeanor. "We all knew he threw hard," Woodward said.

A female fan seated in the 25th row down the right-field line was struck in the head by a liner hit by Calhoun. He waited for a few minutes and watched as the fan was attended to at her seat before returning to the batter's box. The fan eventually walked out of the seating area accompanied by stadium personnel and was transported to a hospital for further evaluation.

Texas swept the season series 6-0. Its only other sweep of an American League opponent was going 12-0 against the Minnesota Twins in 1999. ... Tigers DH Miguel Cabrera went 2 for 3 with two walks and has a seven-game hitting streak. ... Detroit is 1-64 when trailing after seven innings.

Tigers: INF Josh Harrison (hamstring), out since Memorial Day, played his fourth rehab game for Triple-A Toledo. He went 2 for 3 with two RBIs and a walk after previously going 0 for 9.

Tigers right-hander Spencer Turnbull (3-9, 3.65 ERA), sidelined since July 17 with an upper back strain, will start Monday with a 70-pitch limit in the first of three games at home against the Chicago White Sox. Rangers left-hander Mike Minor (9-6, 3.21 ERA) will open a three-game series at Cleveland, having held the Indians to one run in eight innings in a win on June 20 in Arlington.