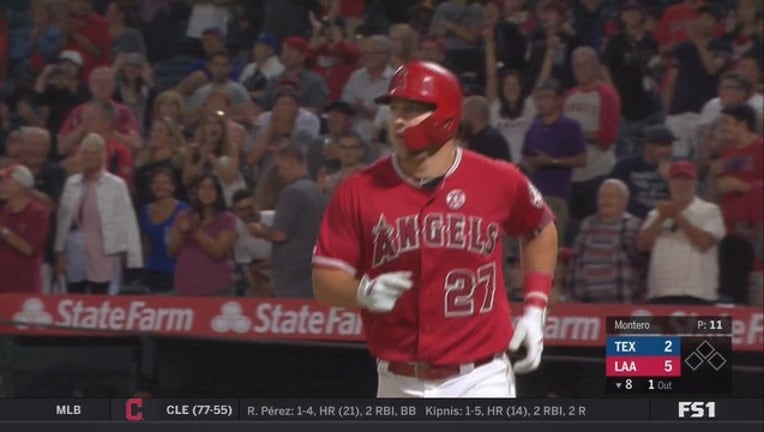 ANAHEIM, Calif. (AP) - The Los Angeles Angels haven't been eight games below .500 since 2016. After five consecutive road losses heading into this homestand, they certainly appeared to be headed to that dismal depth while Texas' Mike Minor dazzled them for six scoreless innings.

Kole Calhoun and Brian Goodwin made sure the Angels didn't bottom out, and Mike Trout added the coup de grace by adding to his major league homers lead.

Calhoun hit a two-run double and pinch-hitter Goodwin added a two-run single in the seventh inning, and the Angels snapped their five-game skid with a 5-2 victory over the Rangers on Tuesday night.

"He pummeled it," Angels manager Brad Ausmus said. "That's the downside of being Mike Trout. You go up there and (everyone) expects him to hit it 420 feet every time."

Trout, who was in a minor slump over the past six games, hit his 11th homer against Texas this season. Only Mickey Mantle has hit that many homers in a season against the Rangers franchise, and he did it in 1961 when they were the Washington Senators.

The Angels' bats came through just in time to snare a win in the opener of a two-game series between AL West also-rans.

Andrew Heaney had 10 strikeouts over six innings of four-hit ball in his second straight outstanding start against Texas, but he left trailing 1-0 before the Angels rallied to win.

"We finally broke through there," said Heaney, who struck out 14 over eight innings of one-run ball in Arlington last week.

Shin-Soo Choo had an RBI single in the third inning and Danny Santana homered in the eighth for the Rangers, who have lost four of five.

Minor (11-8) dominated the Angels for the first six innings, allowing only Andrelton Simmons to reach base during Los Angeles' first 20 plate appearances.

"It really is unfortunate, because that's the best I've seen him in a while," Rangers manager Chris Woodward said. "He deserved a better result than he got."

Minor bounced back sharply from last week, when the Angels hurt him for 10 hits and seven runs in Texas.

"I feel fine, but I just wish I could get some wins," Minor said. "It's no fun losing."

The first three Angels reached in the seventh, and Calhoun drove home Shohei Ohtani and Justin Upton with a one-out double in the gap. Goodwin then added two more runs on Minor's 105th pitch with a single up the middle.

Texas scored an unearned run in the third when Choo singled to drive home Delino DeShields, who had singled and gone to second when Calhoun bobbled the ball in right.

Miguel Del Pozo (1-0) got one out in the seventh to earn his first major league victory against the team that traded him to the Angels on Aug. 9. The 26-year-old Dominican reliever, who made his big league debut last week in Texas, struck out Choo on three pitches.

Hansel Robles pitched the ninth for his 19th save.

Rangers: OF Hunter Pence went on the 10-day injured list with a lower back strain. The move was retroactive to last Saturday for the All-Star selection. Isiah Kiner-Falefa came up from Triple-A Nashville to take his roster spot.

Angels: Reliever Keynan Middleton was reinstated from the injured list for the first time since undergoing Tommy John surgery in May 2018. He missed the final 121 games of last season - which he began as the Angels' closer - and the first 133 games of this season.

Orange County native Patrick Sandoval (0-1, 6.75 ERA) takes another shot at earning his first major league victory for the Angels in the series finale. He faces Ariel Jurado (6-10, 5.48 ERA), who has lost four consecutive starts and given up 22 runs in the last three.