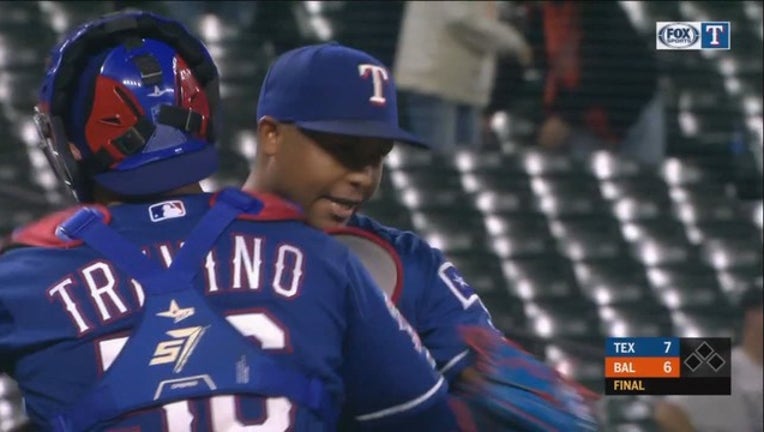 Texas trailed 6-4 before rallying in the seventh. Elvis Andrus had the big blow, a two-run single that put the Rangers ahead to stay.

Despite battling a stomach ailment, Texas rookie Brock Burke still managed to get through five innings. He was charged with six runs and six hits.

Brett Martin (2-3) worked a scoreless sixth inning for the win, and José Leclerc got three outs for his 11th save.

Orioles reliever Paul Fry (1-8) entered in the seventh and walked his first two batters, loading the bases. Shin-Soo Choo then singled in Scott Heineman, trimming Baltimore's lead to one.

After Shawn Armstrong replaced Fry, Andrus drove in Ronald Guzmán and Jose Trevino with a single to center.

Baltimore threatened in the ninth, putting runners on second and third with one out. But Leclerc struck out Mancini and got Santander on a popup to earn a save for the second consecutive night.

The Orioles have dropped six of seven to fall to 46-94 on the season. They are 0-84 when trailing after eight innings.

Calhoun, who entered with a 2-for-22 skid, hit a two-out solo drive off Dylan Bundy in the first. Mancini responded in the bottom half with his first homer in 20 games.

Martin made it 4-1 Baltimore with a three-run shot off Burke with two outs in the second. It was Martin's first homer since June 25 and No. 5 on the year.

After Calhoun tied it again with a three-run homer in the third, Santander belted a two-run shot in the fifth.

Rangers: OF Joey Gallo (right wrist surgery) has taken batting practice over the past week. Manager Chris Woodward hopes to get him back in the lineup before the end of the season. Gallo has not played since July 23. He is batting .253 with 22 homers and 49 RBIs over 70 games.

Rangers: Woodward hasn't committed to a starter for Saturday, but he plans to use an opener.

Orioles: RHP Aaron Brooks (4-7, 5.81 ERA) struggled with his command in his last start, allowing three runs and walking four over just 4 1/3 innings in a 6-4 loss to the Royals.