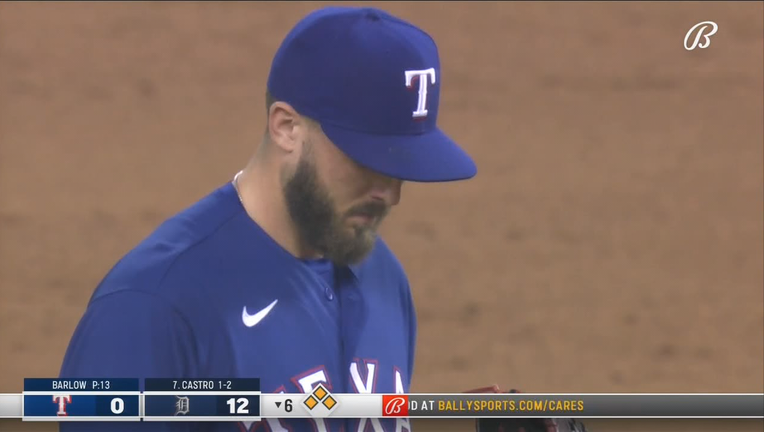 DETROIT - Miguel Cabrera drove in five runs, including a bases-loaded double in a four-run fifth inning, and the Detroit Tigers routed the Texas Rangers 14-0 on Monday night.

The Rangers have lost six straight, the last three by a combined score of 29-0. The last major league team to allow that many runs while being shut out in three straight games was the 1906 Brooklyn Superbas, who were outscored 31-0 between July 6-9.

"If anyone on this team isn't embarrassed right now, they shouldn't be on the field and they shouldn't be part of our organization right now," Rangers manager Chris Woodward said. "These guys all want to play in the major leagues, but you have to earn that."

Tigers starter Casey Mize was only expected to pitch three innings as the team tries to limit his workload. However, when he retired the first nine hitters, he came back out for the fourth, allowing one single. He struck out four.

Mize tried to avoid manager A.J. Hinch at the end of the fourth, but it didn't work.

"I was hoping to stay away from him, because I wanted to go another inning," he said. "But we're being careful with innings right now, and I understand that."

Kyle Gibson (6-2) allowed eight runs, matching a career high, on 10 hits and two walks in five-plus innings. The Tigers had snapped his 16-start unbeaten streak in a 5-3 win on July 7.

"I honestly don't know how to explain this," Gibson said. "They've got some good veteran hitters — I've been facing Miggy since I was in Minnesota — but this isn't indicative of how I've pitched this year. Maybe they are just ahead of me in the scouting report, but I need to fix it."

The Tigers took a 2-0 lead on Akil Baddoo's two-run homer to left in the third inning, and Jonathan Schoop's RBI single made it 3-0 in the fifth.

Gibson hit the next batter, Robbie Grossman, to load the bases with one out. Cabrera fell behind 1-2 before lining a double to left, then brought the crowd of 13,704 to its feet by taking third on the throw home. Cabrera, one of baseball's slowest runners, was originally called out, but the call was overturned by replay.

"Every time he comes to the plate, we’re proud to be out there," said Victor Reyes, who had four hits. "It’s an honor just to play on his team."

Gibson was removed after the Tigers started a seven-run sixth with a walk and a single. Reyes singled off Brett Martin, loading the bases, and Baddoo followed with a two-run single.

After Schoop's RBI single made it 9-0, Grossman singled to reload the bases for Cabrera. This time, he lined an 0-2 pitch to left for a two-run single, earning a standing ovation. Joe Barlow came in and walked Jeimer Canderlario and Eric Haase — the eighth and ninth straight Tigers to reach base — to make it 12-0. Harold Castro ended the streak with a sacrifice fly, scoring Cabrera.

With two hits, Cabrera (2,931) moved past Rogers Hornsby and Jake Beckley for 38th place on the career list. His five RBIs gave him 1,768, tying David Ortiz for 22nd.

"These are big moments for Miggy personally, but they are also huge for our team, our franchise and our fans," Hinch said. "He's passing some very special names right now — he belongs to that elite class of the game."

The Tigers placed C Jake Rogers on the 10-day injured list with a sore arm shortly before the game and recalled C Grayson Greiner from Triple-A Toledo. Hinch said he is expected to miss a few weeks. INF Isaac Paredes was checked by the team's training staff and left the game after singling in the sixth inning.

Texas optioned OF Jason Martin to Triple-A Round Rock after the game and recalled RHP Demarcus Evans.

Things could have been even worse for Gibson, but Joey Gallo threw out a pair of Tigers runners from right field, giving him four assists in his last seven defensive games.

"After the game, I shook Joey's hand and told him I'm proud to be able to manage him," Woodward said. "We were down 10 runs tonight and our best player was doing everything he would do in a tie game. We need more guys to show that kind of effort."

This version has been corrected to show Gibson’s record is 6-2.