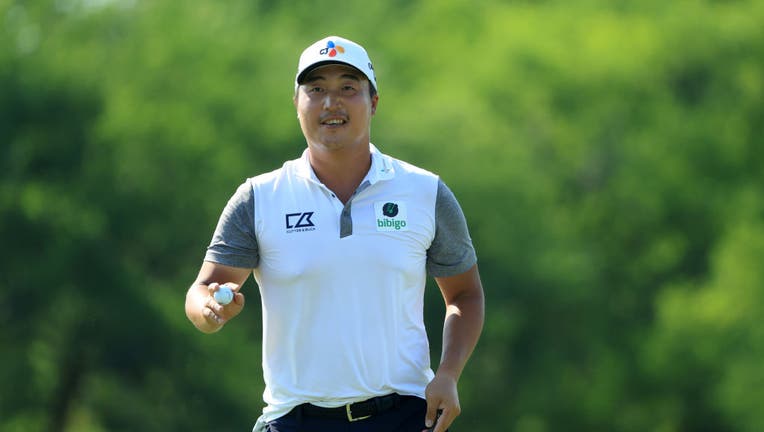 MCKINNEY, TEXAS - MAY 15: K.H. Lee of South Korea reacts to his putt on the 18th green during the final round of the AT&amp;T Byron Nelson at TPC Craig Ranch on May 15, 2022 in McKinney, Texas. (Photo by Sam Greenwood/Getty Images)

McKINNEY, Texas (AP) - K.H. Lee ran across the fairway to try to get a better view of the key shot in his second consecutive victory in the Byron Nelson.

The South Korean must have known it would be close, same as the low-scoring drama around him that included hometown favorite Jordan Spieth and a couple of other major winners in Hideki Matsuyama and Justin Thomas.

Lee's 240-yard shot on the par-5 12th hole stopped less than 5 feet from the pin, and the eagle put him in front for good Sunday on the way to a 9-under 63 and a one-shot victory over Spieth at birdie-besieged TPC Craig Ranch.

Spieth shot a 67 to finish a stroke ahead of Matsuyama (62) and Sebastian Munoz (69), who held or shared the lead the first three rounds. Xander Schauffele had a career-best 61 and tied for fifth with Ryan Palmer (66) and Thomas (67).

A year ago, Lee was playing for a spot in the PGA Championship, where he'll be again next week at Southern Hills in Tulsa, Oklahoma.

Spieth had to settle for another career-best finish in the event he so badly wants to win, a year after the three-time major champion was ninth but never really close in a disappointing final round.

This final round was really close.

Leading by one, Lee made a curling 12-foot putt to save par on the par-3 17th after a short chip ran long when Lee tried to find his footing in the sand with the ball above his feet just outside the bunker.

Spieth missed a 9-foot birdie putt on 17 that would have pulled him even, then had to have eagle on the par-5 18th after Lee's tap-in birdie. Spieth's eagle chip stayed left of the hole.

With short par 4s and reachable par 5s, the birdies never stopped at TPC Craig Ranch, the second-year home of the Nelson.

There were 2,228 birdies after 2,007 a year ago, which was the most on tour last season. Eagles were plentiful, too. Last year, six players reached 20 under. This time it was 14.

Even missed chances at eagles were costly, such as on No. 12 when Munoz's 6-footer circled the cup and stayed out, leaving him a stroke behind not long after Lee followed his clutch shot by making the short putt.

Schauffele posted a clubhouse lead at 23 under with a birdie on 18 just as the last groups were making the turn. The 12-ranked player said he didn't figure on hanging around long with birdies -- and eagles -- so plentiful at Craig Ranch.

He was free to go after Matsuyama's eagle at 18 put the 2021 Masters champion a shot ahead. Still, Schauffele's turnaround was remarkable in his first event since teaming with Patrick Cantlay to win the Zurich Classic.

The reigning Olympic champion was 26 under over the final 49 holes, starting with eight birdies from No. 6 on in the second round to rally from 3 over and make the cut on the number (5 under). He began the final round nine shots back.

Schauffele holed a 97-yard wedge for eagle on the short par-4 sixth then added eight birdies over the last 11 holes for the third score of 61 or better this week. Munoz opened with his second 60 of the season, a first on tour.

"I had no pressure to shoot a low score," Schauffele said. "The leaders are expected to shoot at least five or six (under) to kind of keep the pace. So I was literally just trying to birdie as many holes as possible while being smart as well."

Justin Lower recorded the second of two aces in the round in the stadium setting on 17, landing a low 9-iron from 135 yards just right of the pin before the ball backed up and rolled in.

Marc Leishman had the first hole-in-one on the 213-yard 15th, land a 7-iron short and watching it roll in. It was Leishman's second career ace and the first at the Nelson since Tyler Duncan in 2018.