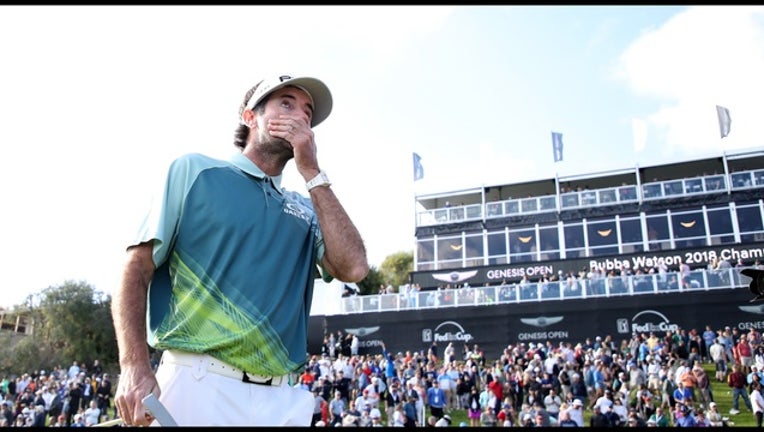 LOS ANGELES (AP) - Bubba Watson was feeling low about his health and even worse about his golf. It reached a point that he wondered if he would ever win again, and he says he talked with his wife on a dozen occasions about retiring.

Being back at Riviera changed his outlook and made him a winner again.

Watson stayed in the game with three key putts early on the back nine, then fulfilled a playful pledge he forgot he even made on the par-3 14th by holing a bunker shot for birdie that allowed him to seize control Sunday in the Genesis Open. He never gave anyone a chance the rest of the way, closing with a 2-under 69 for a two-shot victory over Tony Finau and Kevin Na.

Watson won for the first time in two years, his longest drought of the decade. He joined Lloyd Mangrum and Ben Hogan as three-time winners at Riviera. And he won for the 10th time in his PGA Tour career, an important milestone to him.

"Nobody thought that Bubba Watson from Bagdad, Florida, would ever get to 10 wins. Let's be honest," Watson said. "Without lessons, head case, hooking the ball, slicing the ball, can't putt, you know?"

He put on a clinic at Riviera, somehow managed to keep his focus, carved shots around, over and through the trees, and he made all the right putts.

Watson talks the way he hits the ball - all over the map - and he was particularly elusive about what caused him to lose so much weight last year. He says he reached close to 160 pounds, which he says affected his game and ultimately his confidence.

"I'm here. I'm healthy," he said. "There are people that are a lot sicker than me in this world, so the illness is nothing."

Watson, who finished at 12-under 272, moved from No. 117 to No. 41 in the world, making him eligible for the World Golf Championship in Mexico in two weeks.

Na hit a wedge close to perfection from the worst angle on the reachable par-4 10th hole for a birdie and two-putted for birdie on the 11th to briefly take the lead. He fell back with consecutive bogeys from the trees and shot 69. Finau lurked all day. His last chance was an eagle putt on the 17th that stopped inches short of the hole.

Patrick Cantlay had a one-shot lead going to the back nine until he ran into tree trouble on the 12th and 13th holes. The UCLA alum could do no better than pars the rest of the way for a 71 to tie for fourth with Scott Stallings (68).

Phil Mickelson also was in the hunt. He was within one shot of the lead when he hit a 4-iron from a deep bunker on the 15th hole to just right of the green. But he went after birdie and watched the ball roll 20 feet down the hill, leading to bogey. Mickelson shot 68 and tied for sixth.

Coming off good weeks at Phoenix and Pebble Beach, Mickelson has three straight top 10s for the first time since 2009.

The biggest moment for Watson involved his desperation to find a bathroom after they teed off on the 14th. Cameron Smith, who shot 71 and tied for sixth, told him there was one off the 15th tee and he was only a couple of shots away.

His caddie, Ted Scott, mentioned before Watson stepped into the bunker that he hadn't holed out in some time, so after the ball splashed out of the sand and rolled against the pin before dropping, he turned to Scott and said, "You called it."

Smith came over and told Watson, "You called it." By then, Watson had forgotten their conversation.

No matter. He never came close to bogey until it didn't matter, and he holed an 8-foot par putt on the 18th. The tears began flowing moments later.

It was that four-hole stretch that carried him - a 10-foot birdie putt after hitting his approach into the bunker on the par-5 11th; the 8-foot par save after coming up short on No. 12; another 8-foot save on No. 13 when another shot came up short; and the bunker shot on the 14th.

"It went real fast where I went from losing to winning," he said.

With that, he wrapped up another fun-filled week in L.A. He won Riviera with a 64-64 weekend in 2014. He won Riviera in 2016 while filming a cameo in "Girl Meets World." This time he made a cameo in the NBA All-Star celebrity game, which included an infamous highlight of Tracy McGrady rejecting his shot .

The distractions helped. The health helped even more.

As for that retirement talk?

"I was close," he said. "My wife was not close. My wife basically told me to quit whining and play golf. I would rather be healthy than play golf, so that's what I was focusing on. I was focusing on the wrong things. Pitiful me, not how beautiful my life was."