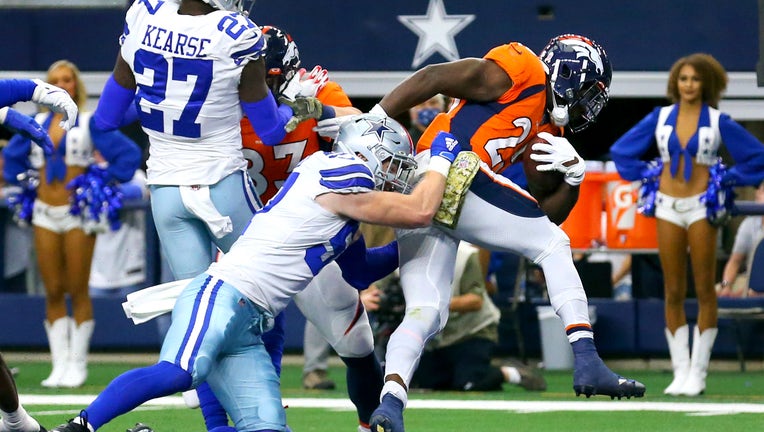 ARLINGTON, TEXAS - NOVEMBER 07: Melvin Gordon #25 of the Denver Broncos runs the ball for a touchdown during the first quarter against the Dallas Cowboys at AT&amp;T Stadium on November 07, 2021 in Arlington, Texas. (Photo by Richard Rodriguez/Ge

ARLINGTON, Texas (AP) - Teddy Bridgewater threw for a touchdown and had a sneak for another, and the Denver Broncos stymied the NFL's No. 1 offense when it mattered in a 30-16 victory over Dallas on Sunday, ending the Cowboys' six-game winning streak.

Dak Prescott returned after missing a game with a strained right calf but couldn't get the Cowboys (6-2) moving until two meaningless late touchdowns that merely avoided what would have been their worst shutout loss at home since 1985.

The Broncos (5-4) sacked Prescott twice, both by rookie Jonathon Cooper for the first of his career, and generally made him uncomfortable in their first game since trading star pass rusher Von Miller -- and with new team sacks leader Malik Reed (hip injury) inactive.

Denver also began without left tackle Garett Bowles (ankle) and lost right tackle Bobby Massie and right guard Graham Glasgow to ankle injuries. Glasgow was taken off on a cart with an air cast on his lower left leg on the final play of the first half.

Still, the Broncos got their offense moving with the running game. They handed Dallas its first double-digit deficit of the season at 13-0 on Bridgewater's 41-yard touchdown pass to Tim Patrick, who beat NFL interceptions leader Trevon Diggs at the goal line.

The lead reached 30-0 in the Broncos' seventh consecutive victory in the series, a streak that goes back to 1995. Prescott threw two touchdown passes to Malik Turner in the final five minutes.

Even when the Cowboys thought they did something going right, they didn't. Dallas blocked a punt on the opening possession of the second half, but didn't take over inside the Denver 20 because rookie Nahshon Wright touched the loose ball beyond the line of scrimmage and Denver recovered.

The Broncos got to start over at their 19 and drove to the third of four field goals from Brandon McManus, who bounced back from his first missed extra point of the season to nail a 53-yarder.

The Cowboys were 0 for 4 on fourth downs, including failures on their first two possessions. Receiver Amari Cooper had his first drop of the season to force one of those failed fourth downs and Dallas finished with a season-low 290 yards -- about half with the game decided.

Prescott, the NFL leader in completion percentage at better than 73%, was 19 of 39 for 232 yards as his franchise-best, four-game run with at least three touchdown passes ended.

Bridgewater finished 19 of 28 for 249 yards with several big throws that helped the Broncos convert 8 of 15 third downs.

Javonte Williams had 17 carries for 111 yards, including a 20-yarder to kick-start Denver's first scoring drive, which ended on Melvin Gordon's 3-yard run. Gordon had 80 yards as the Broncos ran for 190 against the league's sixth-best run defense. 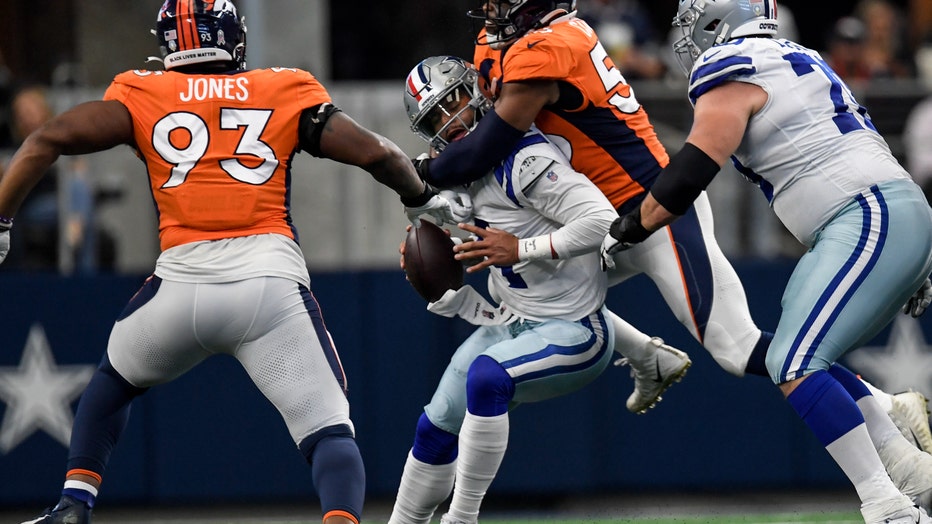 ARLINGTON , TX - NOVEMBER 7: Jonathon Cooper (53) of the Denver Broncos sacks Dak Prescott (4) of the Dallas Cowboys during the first half at AT&amp;T Stadium on Sunday, November 7, 2021. (Photo by AAron Ontiveroz/MediaNews Group/The Denver Post

Broncos: Patrick had four catches for 84 yards before he was helped off late in the third quarter. ... DT McTelvin Agim didn't return after injuring a knee. ... First-round draft pick Pat Surtain II sustained a knee injury.

Cowboys: RB Ezekiel Elliott appeared slowed by a right knee injury that has bothered him this season. He limped off after one of his 10 carries (for 51 yards) and went to the sideline again a play after taking a screen pass 21 yards. Elliott was still playing with the game out of reach late. ... The Cowboys had a retooled offensive line with LT Tyron Smith (ankle) inactive. Terence Steele took his spot and RT La'el Collins started for the first time since the opener. Collins didn't get his job back after serving a five-game suspension for violating the NFL's substance-abuse policy.

Broncos: Denver tries to go 3 for 3 in consecutive weeks against the NFC East. After beating Washington and Dallas, the Broncos get Philadelphia at home next Sunday.

Cowboys: Atlanta at home next Sunday.