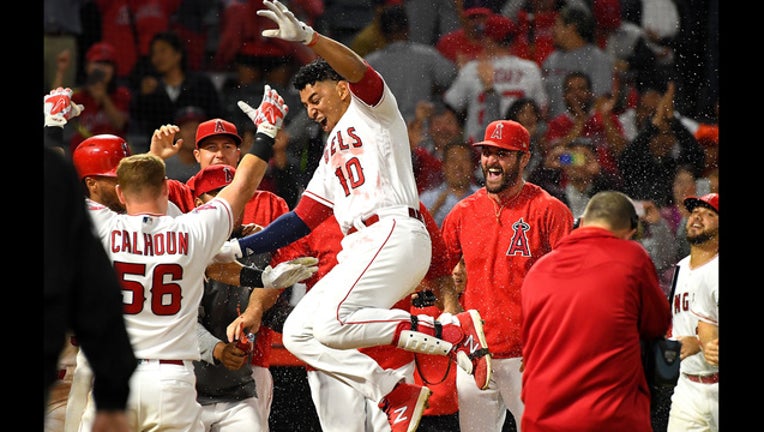 Jose Briceno of the Angels celebrates as he crosses the plate after hitting a walk off home run in the eleventh inning against the Rangers at Angel Stadium on September 24, 2018 in Anaheim, California. (Photo by Jayne Kamin-Oncea/Getty Images)

ANAHEIM, Calif. (AP) - The Los Angeles Angels celebrated Jose Briceno's extra-inning homer with the frenzied enthusiasm of a team barreling toward the playoffs, not a team that needs a six-game winning streak this week just to finish at .500.

Although the Angels are staying home for yet another October, they're looking to build for next season with small successes - and big celebrations, apparently.

Briceno delivered a pinch-hit homer leading off the 11th inning, and the Angels snapped their five-game skid with a 5-4 victory over the Texas Rangers on Monday night.

Shohei Ohtani hit his 21st homer in the first inning and Michael Hermosillo added his first career homer as the Angels opened the final homestand of their fourth consecutive season out of the playoffs.

After Taylor Cole (3-2) retired the Rangers in the 11th, Briceno drilled an 0-2 pitch from Matt Moore (3-8) to center for his fifth career homer. It was the Angels' first walk-off homer by a pinch-hitter since Scott Spiezio did it in 2000.

After improving to 76-81, the Angels were ready to party: Briceno's teammates ripped his jersey off his back, tore his undershirt and repeatedly pelted him with rosin and liquids when he reached home plate.

"Yeah, I didn't know what was going on around me, so I just tried to close my eyes," Briceno said with a grin.

After a 1-5 road trip that included four straight humiliating blowout losses, the Angels returned home with a four-homer performance and a strong start from Felix Pena. The 28-year-old former Cubs reliever yielded five hits over seven innings and struck out six, continuing his improbable rise as a starter in the Angels' injury-plagued rotation by matching the longest appearance of his career.

Angels rookie Ty Buttrey was one out away from his fifth career save, but after Ronald Guzman doubled with two outs in the ninth, pinch-runner Delino DeShields scored the tying run on pinch-hitter Elvis Andrus' single to left.

Guzman and Jurickson Profar homered for the Rangers, who opened their season-ending road trip with their sixth loss in eight games.

"I thought it was a really well-played game," Rangers interim manager Don Wakamatsu said. "We talked about playing throughout the rest of the season hard, with some energy, with some personality. We've got a lot of bright spots."

Adrian Sampson yielded five hits and four runs while pitching into the sixth for Texas.

Two batters after Jefry Marte hit his first homer since Aug. 21 in the fourth inning, Hermosillo got his first career homer - and a big hug from Mike Trout on his way back to the dugout - in his 28th game with the Angels. The 23-year-old outfield prospect made his big-league debut in May, and he said his father already laid claim to his first home run ball in a fortuitously timed text message shortly before this game.

Rougned Odor singled in the sixth and scored when Profar's 19th homer barely cleared the wall in right.

Marte was hit by a pitch from Sampson leading off the sixth. He advanced on a balk and a groundout before scoring the go-ahead run on Connor Sadzeck's wild pitch.

Ohtani hit a 428-foot shot to right field in the first inning, interrupting a 3-for-22 slump with another superlative blast by the Angels' two-way sensation. He has five homers while batting .327 against Texas this season. He also hit into two double plays and struck out, but his 21 homers are fourth-most among AL rookies.

Trout went 1 for 3 with two strikeouts, but drew his 116th and 117th walks of the season to set a franchise record, surpassing his mark in 2016.

Before the game, Angels manager Mike Scioscia told the team-owned radio station that he would like to manage again next year. Scioscia is finishing his 19th season in the Angels' dugout, and his contract expires this year. He has been widely expected to step down when the season concludes, but Scioscia sounded open to returning or to managing elsewhere in the majors.

Angels: Andrelton Simmons wasn't in the starting lineup due to a sore knee, but he worked out on the field. The star shortstop landed awkwardly while fielding Sunday in Houston. ... LF Justin Upton got a rest day.

Angels: Matt Shoemaker (2-2, 5.48 ERA) makes the sixth start of his injury-plagued season after getting chased in the third inning of last appearance in Oakland.