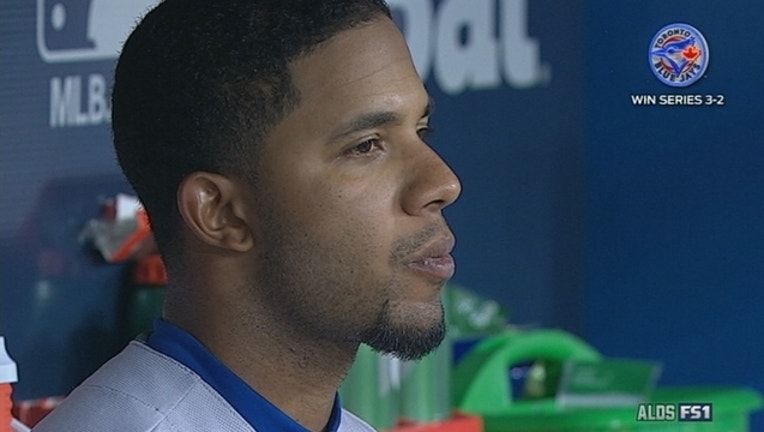 TORONTO (AP) — The Toronto Blue Jays clinched their first trip to the American League Championship Series since 1993, overcoming one of the most bizarre plays in playoff history when Jose Bautista hit a three-run homer after three Texas Rangers errors for a 6-3 victory Wednesday in the deciding Game 5 of the Division Series.

The Blue Jays became the third team to win a best-of-five series after losing the first two games at home. They play the winner of Game 5 between Houston and Kansas City later Wednesday. Game 1 of the ALCS is Friday night.

Bautista's homer capped an event-filled, 53-minute seventh inning that took a turn when Toronto catcher Russell Martin's throw back to the pitcher deflected off batter Shin-Soo Choo and allowed the tiebreaking to score.

"It's the most emotionally charged game that I've ever played," Bautista said.

The Blue Jays filed a protest after an umpire review ruled Rougned Odor was allowed to cross home plate. Toronto fans pelted the field with debris during the 18-minute delay.

The Rangers started the bottom half by making three straight errors, and Toronto rallied. Benches cleared twice in the Blue Jays' half of the inning.

Roberto Osuna got the final five outs for his first postseason save.

Osuna turned toward the outfield after striking out Wil Venable, looked to the sky and was mobbed by his teammates as jubilant fans rocked the Rogers Centre.

After Edwin Encarnacion tied it 2-all with a second-deck drive off tough-luck loser Cole Hamels in the sixth, Odor led off the seventh with a single and went to third on a sacrifice and groundout.

With Choo up, Martin's throw back to reliever Aaron Sanchez deflected off Choo and dribbled toward third base.

"I just caught the ball and threw it back very casually and it hit his bat and then next thing you know run scores. It's never happened in my life before," Martin said. "It's just one of those moments, and it created an opportunity for us to do something special."

Fans littered the field with objects during the delay as umpires sorted out a play that is certain to rank up there with Derek Jeter's Jeffrey Maier homer or Reggie Jackson's hip block of a throw as one of the craziest in the postseason.

According to rule Major League Baseball rule 6.03(a)(3), the batter is not to be charged with interfering with the catcher if the batter is still in the batter's box and doesn't make a movement to block or disrupt the throw.

This type of play is not subject to manager's review but Scott, the crew chief, after discussing the ruling with Blue Jays manager John Gibbons, called an umpire's review. After a delay of 2 minutes, 32 seconds, the play stood and fans continued to throw objects on the field.

The Blue Jays filed a protest.

No need for the paperwork, though.

The Rangers made three consecutive errors to start the bottom half, with Martin reaching on a fielding error by Elvis Andrus to start it off.

Kevin Pillar followed with a grounder to first but Martin was safe at second on an errant throw by Mitch Moreland.

After Dalton Pompey pinch ran for Martin, Ryan Goins followed with a sacrifice bunt. Adrian Beltre fielded the ball and threw to third, but Andrus dropped the ball for his second error of the inning, loading the bases for Ben Revere.

Revere grounded into a fielder's choice, with Moreland throwing Pompey out at the plate.

After Sam Dyson relieved Hamels, Josh Donaldson tied it at 3 with a flare just beyond the reach of Odor at second, but Revere was forced out.

Bautista followed with a towering drive into the second deck, glaring at Dyson as he stood at home plate to admire his go-ahead drive, enthusiastically flipping his bat away.

With some fans continuing to litter the field, Edwin Encarnacion turned to face the crowd and appealed for calm, lifting his bat and helmet over his head. Dyson took exception and walked over to confront Encarnacion, leading to both dugouts and both bullpens emptying.

During the scrum that was quickly dissolved, 20 Toronto police officers stood across the outfield, while others stood along the foul lines. Police later stood on the roof of the Rangers' first base dugout before the bottom of the ninth.

Encarnacion and Chris Colabello both singled when play resumed, but the bat-around inning ended when Troy Tulowitzki fouled out. Dyson made contact with Tulowitzki as he walked off, leading to another benches-clearing confrontation, with catcher Chris Gimenez shoving Tulowitski before the scrum was broken up.

Osuna fanned Josh Hamilton and Andrus to finish the eighth, stranding runners at first and second.

Texas opened the scoring in the first when Delino DeShields scored on a fielder's choice by Prince Fielder. Choo homered off Marcus Stroman in the third to make it 2-0.

Choo's homer was the first for the Rangers since Odor connected off David Price in the seventh inning of Game 1.

Toronto cut the deficit in half in the third on Bautista's two-out double.