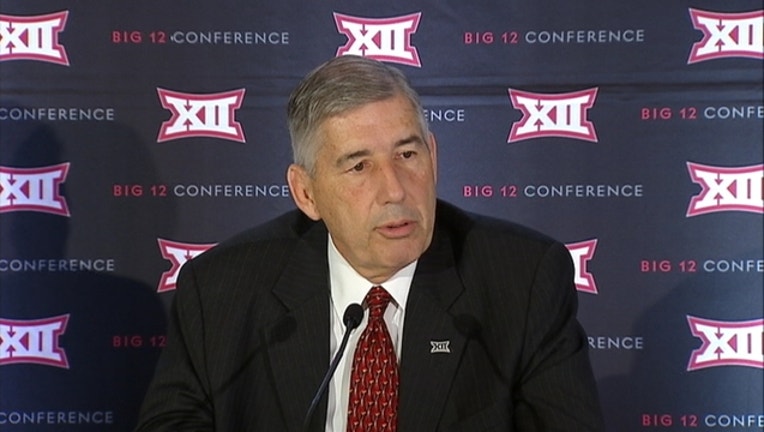 Big 12 commissioner Bob Bowlsby announced Friday that the conference is bringing back a football championship game starting in 2017.

IRVING, Texas (AP) — The Big 12 is bringing back its football championship game in 2017, regardless of whether the conference expands from its current 10 members.

Commissioner Bob Bowlsby said Friday as the conference wrapped up three days of meetings that the university presidents and chancellors voted to approve "in concept the re-implementation of a championship football game."

As expected, there was no resolution from the conference on the topic of expansion.

"We certainly consider there to be an array of options," Bowlsby said about growing the league. "We saw compelling data and had good discussions about the championship game. I think it's fair to say, I think, there were still some questions raised about whether adding members was going to be the right thing or if in the end it was going to be dilutive."

The Big 12 abandoned its conference title game after the 2010 season, when realignment stripped the league of four schools — Missouri, Texas A&M, Colorado and Nebraska. The Big 12 added West Virginia and TCU and has been a 10-team conference, playing a nine-game, round-robin football schedule ever since.

How the conference will decide which teams play in the championship game and a scheduling format are still to be determined.

"We have a lot of details to work out," Bowlsby said.

The Big 12 hired consultants to analyze whether bringing back the championship game would increase its chances of making the College Football Playoff and its revenue. In both cases, the answer came back yes.

"The presentation as the commissioner said our consultants on the value of the championship game both in terms of providing a 13th-data point (game) to help our chances of getting into the football playoffs was very, very convincing, " Oklahoma President David Boren said. "Also, very helpful in terms of our financial position in increasing the revenue distribution per school."

After the Big 12 was left out of the first playoff, the conference began looking into reviving the championship game and petitioned for a change to NCAA rules to do it with a 10-team conference. The NCAA recently approved the Big 12's request to allow conferences to hold football title games with less than the previously required 12 teams split into two divisions.