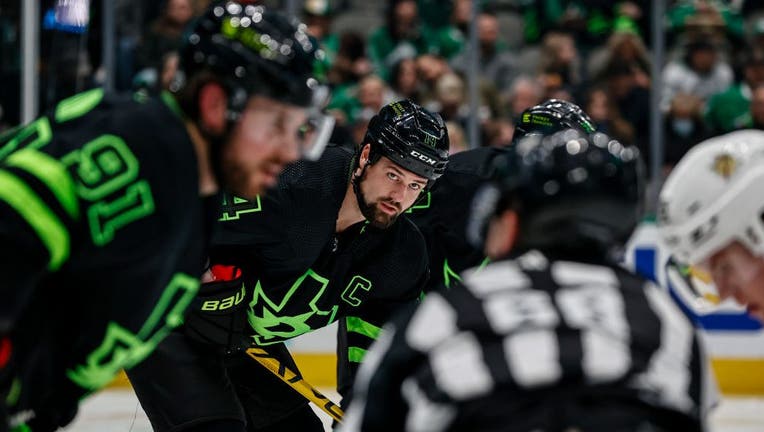 DALLAS, TX - JANUARY 06: Dallas Stars left wing Jamie Benn (14) waits for the puck to drop during the game between the Dallas Stars and the Florida Panthers on January 6, 2022 at American Airlines Center in Dallas, Texas. (Photo by Matthew Pearce/Ico

DALLAS - Dallas captain Jamie Benn said he never felt any symptoms during his time in COVID-19 protocols, and the Stars exhibited no ill effects from a long layoff in their return to the ice after a 2 1/2-week pause because of virus issues throughout the team.

Benn had a goal and an assist two days after getting cleared and the Stars won their first game in 17 days, beating the Florida Panthers 6-5 in a shootout Thursday night. They trailed three times in the game's first 25 minutes and had to go to overtime after giving up a goal with 29 seconds remaining in regulation.

"It wasn't our prettiest, but we got the result we wanted," Benn said.

"Give our guys a lot of credit for just finding a way to win. That 17-day break, that’s a tough thing, really is," coach Rick Bowness said. "There were times we made the game a lot harder on ourselves than we should have. That comes from not playing and getting in the flow of the game, and we can fix those things. ... It wasn’t going to be a Picasso tonight."

The ending was picture perfect. Joe Pavelski and Jason Robertson, who had a goal in regulation, scored on the only two shots in the shootout for the Stars while Braden Holtby stopped both Florida shots to end the game.

Benn was the last of 11 Stars players to come out of COVID-19 protocols since their last game Dec. 20. They had six games postponed during that extended break.

The Panthers left their net empty and had an extra skater on the ice when Jonathan Huberdeau scored with 29 seconds left in regulation to force overtime.

"Wouldn’t say I was overly happy, I thought we played a 50-50 hockey game on the road, stretches we played well, and stretches we didn’t," Panthers interim coach Andrew Brunette said. "Kind of wasn’t our A-game, but we found a way. ... We were little inconsistent."

Florida had won its previous four games, all at home, while scoring 24 goals in that span.

Stars defenseman John Klingberg, who had two assists and a goal-saving play, had one final shot that was kicked away by goalie Sergei Bobrovsky with a second left in the five-minute overtime period.

Benn put Dallas up 5-4 with 13:34 left after Bobrovsky came out of the net to play a puck. But Denis Gurianov picked it off and skated behind the net, drawing the recovering goalie to his right before passing to Benn for a shot from the other side.

Aleksander Barkov had the first two Panthers goals, including the captain’s short-handed score in the opening seconds of the second period to make it 2-1.

The Stars tied it again on that power play, carried over from the end of first period, when Benn took a shot and the puck squirted under Bobrovsky's legs before Gurianov knocked it into the net.

The Stars scored twice in 28 seconds to go ahead for the first time in the second period. Robertson extended his NHL-best active home scoring streak to nine games with his 11th goal of the season before Tyler Seguin swiped a short backhander for a 4-3 lead.

The Panthers tied it at 4 on defenseman Mackenzie Weegar’s shot from the right circle through traffic, capping a second period when both teams scored three times.

Klingberg kept the Stars from falling behind 2-0, then got them even at 1-1 in the span of about a half-minute in the first period.

The puck slid along the front and ricocheted off the left post on a backhander by Joe Thornton, in his 1,700th NHL game over 24 seasons. The puck was still in the crease behind Holtby before Klingberg swiped it away.

After a faceoff on the other end, Klingberg took a shot from the blue line and was credited with an assist after the puck went off the stick of Michael Raffl.

NOTES: The Stars got their sixth overtime/shootout win, matching their total for all of last season, when they missed the playoffs. ... Aaron Eklad had three assists for the Panthers. ... Thornton is only the sixth NHL player to play in 1,700 games. "So many people helped me get here, trainers, great teammates, great coaches. It’s a community that helps you get this far, and I thank them all," the 42-year-old Thornton said. ... Five different Stars scored goals, like the 7-4 win over Minnesota in their previous game when all the goals were scored by different players.

Florida: At Carolina on Saturday.

Dallas: Sidney Crosby and the Pittsburgh Penguins visit the Stars on Saturday for the first time since Oct. 26, 2019. Pittsburgh has won 10 straight.