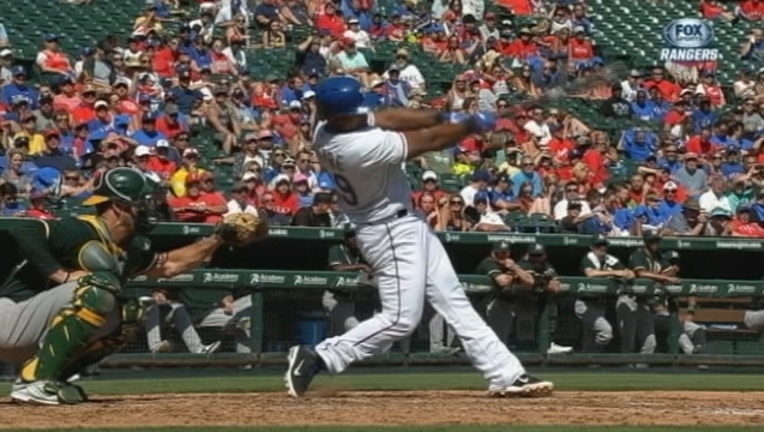 ARLINGTON, Texas (AP) — Adrian Beltre and the Texas Rangers can now focus on what may be their most important series of the season.

The AL West-leading Houston Astros are up next.

Beltre homered twice to drive in five runs, Shin-Soo Choo also went deep and the Rangers wrapped their series against Oakland with a 12-4 victory Sunday. That kept them within 1 1-2 games of Houston, which opens a four-game series Monday in Texas.

"Obviously, we want to face the team that is in front of us," Beltre said. "We're looking forward to getting our chance to climb up to where we want to be."

Texas (75-67) was on the verge of being only a half game back, but the Astros (77-66) rallied with five runs in the ninth inning Sunday for a 5-3 victory at the Los Angeles Angels.

"I think we've got plenty of energy. ... Today was a grind," manager Jeff Banister said after the Rangers' longest nine-inning game this season, three hours and 52 minutes.

"We talk about not looking ahead, not getting ahead of ourselves and staying focused on today. We have done a tremendous job at that," he said. "But they're well aware of the next four days."

Danny Valencia had a two-run triple for Oakland (61-82), which became the first American League team to clinch a losing record.

The A's had gone to the playoffs each season since their last losing record in 2011. They won division titles in 2012 and 2013 before being a wild-card team a year ago.

Choo put the Rangers ahead with his 18th homer, a solo drive onto the hill beyond center in the first. He was on base for both of Beltre's homers, a two-run shot in the fourth and a three-run blast in the fifth that made it 6-0.

Rougned Odor added a three-run homer in the eighth for the Rangers, who stayed one game ahead of Minnesota for the AL's second wild card.

Rookie right-hander Chi Chi Gonzalez (3-5) went 5 1-3 innings for his first victory in the majors since a three-hit shutout at Kansas City on June 5. The Rangers used five relievers after that.

Felix Doubront (3-2) struck out five, but allowed seven runs and seven hits in 4 1-3 innings. He was gone a batter after Beltre's second homer, when Prince Fielder reached on an infield single.

It was Beltre's 27th career multihomer game, his first since June 4, 2014. ... Oakland rookie catcher Carson Blair homered for his first career hit. ... The four homers matched a season high for the Rangers, who hadn't had a four-homer game at home since April 21, 2013.

The Rangers had lost five of their previous six games against left-handed starters, so Banister did what he could to get his best hitters in the lineup. That included slugger Mike Napoli getting his first professional action in left field. Napoli played the first five innings in left without getting a ball hit his way before going to his usual position, first base. Napoli then had a fielding error on a grounder in the sixth.

When Gonzalez won at Kansas City, he was 2-0 after throwing 14 2-3 scoreless innings over his first two major league starts. The 23-year-old right-hander was sent back to Triple-A Round Rock after giving up six runs in 1 2-3 innings against the Angels, and was recalled Friday for his third stint in Texas this season.

Athletics: Reliever Edward Mujica strained his right hamstring covering first base on a play in the fifth. ... C Stephen Vogt (groin), out for a week, played catch on the field before the game.

Rangers: Robinson Chirinos is still bothered by soreness in his strained left shoulder. The catcher will see a doctor again when the inflammation subsides.

Athletics: Sonny Gray goes for his 14th win when Oakland opens a four-game series at the Chicago White Sox.

Rangers: Cole Hamels (9-8) was given an extra day of rest, which set the right-hander up to pitch the series opener against Houston. He is 3-0 with a 3.34 ERA in his last five starts.