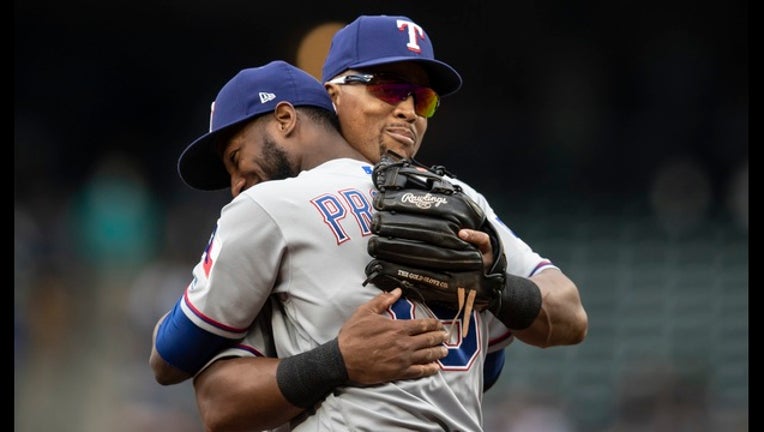 Third baseman Adrian Beltre of Rangers get a hug from Jurickson Profar as he is replaced during the fifth inning against the Seattle Mariners at Safeco Field on September 30, 2018 in Seattle, Washington. (Photo by Stephen Brashear/Getty Images)

SEATTLE (AP) - Adrian Beltre was not ready to say Sunday was the final game of his career.

Every other part of the day had the feel of a farewell, and a celebration for one of the best third basemen ever.

"I wanted to make sure to enjoy it, do what you do and if this is it, this is it," Beltre said. "It was just not something I could say was defined, 'This was my last game or my last out, last groundball, last hit.' But it could be. So it's difficult to explain, but I do not know how I feel."

Beltre and the Texas Rangers were shut down by Seattle starter Roenis Elias in the Mariners' 3-1 win on Sunday that closed out the 2018 season. The day was overshadowed with what-ifs mostly about whether Beltre will retire after 21 seasons, but also if Nelson Cruz will be back in Seattle in 2019 with his contract up after the season.

The majority of the focus was on Beltre and the day had a feeling of finality for a career likely bound for Cooperstown. Beltre played 4½ innings before being lifted before the bottom of the fifth, given a standing ovation by the crowd of 21,146. Beltre went 1 for 2 and finished with a .273 average, 15 homers and 65 RBIs.

Like his demeanor for most of his career, Beltre had fun should it be his final game. Beltre blooped a single to right leading off the second inning. He was almost immediately doubled off when Joey Gallo's liner was caught by first baseman Ryon Healy. After he was called out, Beltre jogged to the Mariners dugout railing and gave close friend Felix Hernandez a hug before heading back to the Rangers dugout.

Beltre had another humorous moment on the final out of the fourth inning with runners on first and second. Ryon Healy stopped running to third and retreated toward second base, but Beltre waved Healy back toward third and tagged him for the final out.

"Right before that at-bat I thought this was perfect. I don't have to throw, I don't have to move. If they hit it to me I'm going to stand in the line until they come over," Beltre said. "It happens and Healy ... he was cool enough to come back to me and let me tag him."

Beltre, who spent five seasons with the Mariners from 2005-09, was given a standing ovation leading off the fifth inning as a "Thank You, Adrian" message was shown on the video board. Beltre tipped his helmet to the crowd before flying out to right field. Beltre took the field for the bottom of the fifth and was replaced by Jurickson Profar, receiving hugs from all of his teammates on the field and in the dugout.

"It was emotional. I wasn't expecting that. They told me a couple of things that was deep and got me choked up a little bit right there," Beltre said.

Beltre didn't give a timeline for when he would make a decision on his future but intended to take a little break before making a choice.

"I know how much the fans truly enjoyed his time here," Seattle's Kyle Seger said. "Being the home player and watching a visiting player get that type of ovation was pretty special."

Cruz was replaced in right field with one out in the top of the fourth inning by Ben Gamel. Cruz was given a standing ovation as he jogged to the dugout in what could be his final game with the Mariners. Cruz has been one of the best free agent signings in Mariners history. Cruz, who turned 38 in July, hit .256 with 37 home runs and 97 RBIs this season. He hit 163 homers and had 414 RBIs in his four seasons with Seattle.

"Hopefully we can get something done," Cruz said.

The blooper by Beltre was the only hit allowed by Elias (3-1), who struck out four and walked none in a game that took just 2 hours, 14 minutes. David Freitas had an RBI double and Andrew Romine a run-scoring single off Yovani Gallardo (8-8) in the second inning. Seager added a sacrifice fly in the fifth.

Seattle finished with 89 victories, its most since 2003, but it was a hallow accomplishment after seeing the longest playoff drought in any of the four major U.S. pro sports extended to 17 years. The Mariners last made the postseason in 2001 and in the middle of June appeared set to finally end that streak leading Oakland by 11 games in the wild-card race. That lead disappeared quickly as Oakland caught Seattle by August and raced past the Mariners over the final two months.

Rangers: Texas opens on March 28 at home against the Chicago Cubs.

Mariners: Seattle starts on March 20 in Tokyo against Oakland.