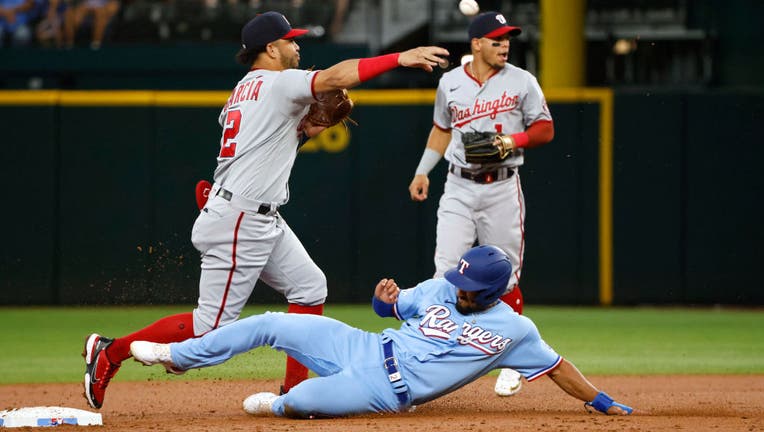 ARLINGTON, TX - JUNE 26: Marcus Semien #2 of the Texas Rangers is out at second base as Luis Garcia #2 of the Washington Nationals throws to first base to complete the double play during the first inning at Globe Life Field on June 26, 2022 in Arling

ARLINGTON, Texas - Jackson Tetreault allowed one run in six-plus innings in his third major league start, Josh Bell had his second three-hit game of the weekend and Nelson Cruz drove in three runs as the Washington Nationals beat the Texas Rangers 6-4 Sunday.

The Nationals scored three runs in each of the first two innings. They’ve won four of their last six games and took their first road series since sweeping three at Cincinnati on June 3-5.

Tetreault (2-1) took a shutout into the seventh and left with runners at second and third and none out. A run scored on a sacrifice fly by Jonah Heim off reliever Erasmo Ramirez.

The Rangers scored three in the ninth inning against Francisco Perez on Nathaniel Lowe’s RBI single and Heim’s two-run homer. Tanner Rainey came on and earned his 10th save in 13 opportunities.

Scoring so much so early, Bell said, "allows us to take a step back and allow our starter to go out and do what he did today. Lights out."

Tetreault allowed four hits, two after the second inning, while striking out four and walking two on 99 pitches.

Washington’s seventh-round draftee in 2017 made his first road start. Last time out, he limited Philadelphia to three unearned runs in seven innings to snap the Nationals’ eight-game losing streak. That followed his big league debut as an emergency callup on June 14, when he gave up seven runs in four innings against Atlanta.

Bell, from nearby Irving, had an RBI double and two singles. He’s hitting .429 in his last 10 games and has driven in eight runs. He’s hitting .464 in seven career games against his hometown team.

Cruz, a two-time All-Star during eight seasons with Texas, singled home one run in the first inning and two in the second.

Texas went 3-2 in a homestand against NL East competition.

It was essentially Texas’ second consecutive bullpen game though not intended to be. Starter Glenn Otto (4-3), activated from the COVID-19 list before the game, allowed the six runs in two innings in making his first appearance since June 4. He gave up six hits and walked three with a personal three-game winning streak snapped.

Rangers manager Chris Woodward cited Otto having only one rehab outing in three weeks contributing to his woes Sunday.

"You could just tell he was never comfortable out there," Woodward said. "He just never found a rhythm."

The Rangers added OF Steven Duggar to the active roster after acquiring him from San Francisco on Thursday. He entered the game in the eighth inning and popped out. They also recalled RHP Josh Sborz from Triple-A Round Rock, placed RHP Matt Bush (forearm soreness) on the injured list retroactive to Saturday and designated RHP Demarcus Evans for assignment.

Nats RF Juan Soto reached base all five times, with four walks and a single. … Texas DH Kole Calhoun doubled twice, missing a ninth-inning home run by inches. ... Rangers rookie 3B Josh Smith walked in the first inning and has reached base in all 10 of his major league games. … The Rangers for 0 for 19 with runners in scoring position in the series before Lowe’s ninth-inning single.