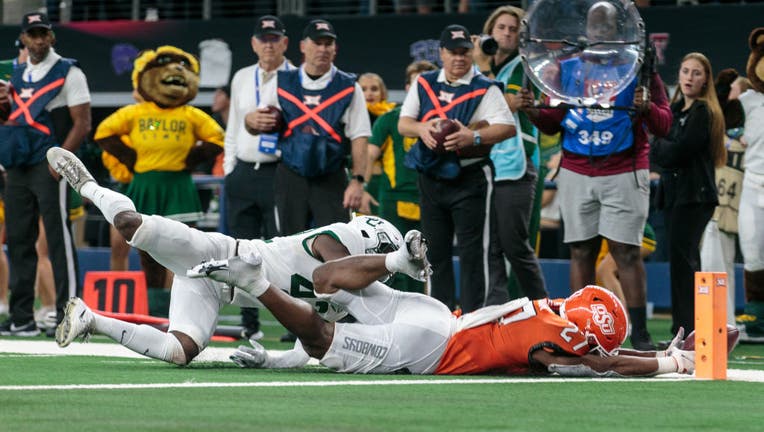 ARLINGTON, TX - DECEMBER 04: Oklahoma State Cowboys running back Dezmon Jackson (27) just misses a dive for the end zone in the last seconds of the game against the Baylor Bears on December 4th, 2021 at ATT Stadium in Dallas Texas. (Photo by William

ARLINGTON, Texas (AP) - Dezmon Jackson came up inches short on a desperate, fourth-down dive with 24 seconds and fifth-ranked Oklahoma State fell to ninth-ranked Baylor 21-16 in the Big 12 championship game Saturday, knocking the Cowboys out of contention for a playoff spot.

The Cowboys (11-2, CFP No. 5) rallied back, then went 89 yards on 17 plays on their final drive. But their Big 12 and national championship hopes came up just short.

fter having first-and-goal from 2 following a pass interference penalty, Jackson gained a yard and was held for no gain before an incomplete pass by Spencer Sanders.

On fourth down from the 1, Jackson tried to sweep wide left, but with Jairon McVea in pursuit, he barely missed while trying to reach the pylon in the front left corner of the end zone.

There would need to be some chaos, in form of an upset or two in other conference title games later in the day, for third-time Big 12 champion Baylor to have a chance to be in the final four for the first time when the CFP rankings come out Sunday.

Sanders threw four interceptions, one by McVea, and the Cowboys were without leading rusher Jaylen Warren because of his lingering ankle and shoulder issues.

Shapen started his second game in a row for injured quarterback Gerry Bohanon (right hamstring), and the Bears won even with only 242 total yards of offense. They had only 36 yards after halftime, while Shapen finished 23-of-28 for 180 yards passing overall.

After Oklahoma State took a 3-0 lead on Tanner Brown's 23-yard field goal set up after Baylor fumbled on the opening drive of the game, the Bears scored 21 consecutive points. Sanders threw picks on the next two drives, setting up Baylor with short fields for three-play TD drives -- a 2-yard TD pass to wide-open tight open Ben Sims and Drew Estrada's 4-yard scoring catch.

Baylor had a 21-3 lead after an incredible 13-yard catch by Tyquan Thornton with a defender on his back with 5 1/2 minutes left in the first half.