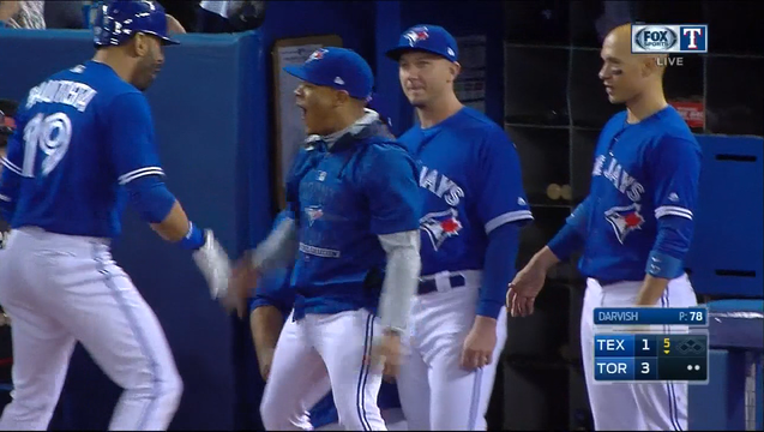 Shin-soo Choo homered into the center-field party deck on the first pitch of the game from Marco Estrada, but Bautista hit a two-out drive in the fifth, his eighth home run in May after one in April.

Estrada (4-2) allowed four hits in six innings to win for the third time in four starts. Aaron Loup got one out in the seventh, Ryan Tepera finished the inning and Joe Smith worked the eighth. Roberto Osuna threw a perfect ninth for his ninth save, completing a six-hitter.

Darvish (5-3) gave up three runs and five hits in six innings. He had been 4-0 with a 2.54 ERA in six starts since losing April 18 at Oakland. Texas has lost five in a row for the first time this year.

Choo hit his 21st leadoff homer, and his first this season. It marked the eighth time Estrada has surrendered a leadoff home run and the first time it happened on the first pitch.

No. 9 Luke Maile walked and Devon Travis singled in the fifth, around Kevin Pillar's drive that was caught by center fielder Jared Hoying as he crashed into the outfield scoreboard. Bautista homered on a first-pitch slider.

Texas made a pair of blunders on the bases in the sixth. Nomar Mazara was safe at first when shortstop Ryan Goins dropped an infield popup, but Mazara rounded first too far and was thrown out. The inning ended when Rougned Odor stumbled out of the batter's box after hitting a slow roller past the mound, and he was thrown out easily.

Rangers: Texas claimed OF-1B Peter O'Brien from Cincinnati and optioned him to Double-A Frisco. To make room on the 40-day roster, RHP Tyson Ross was moved to 60 day DL. Ross, who has not pitched this season, can be activated on June 1.

Blue Jays: 3B Josh Donaldson and SS Troy Tulowitzki did not play, a day after they were activated from the disabled list.