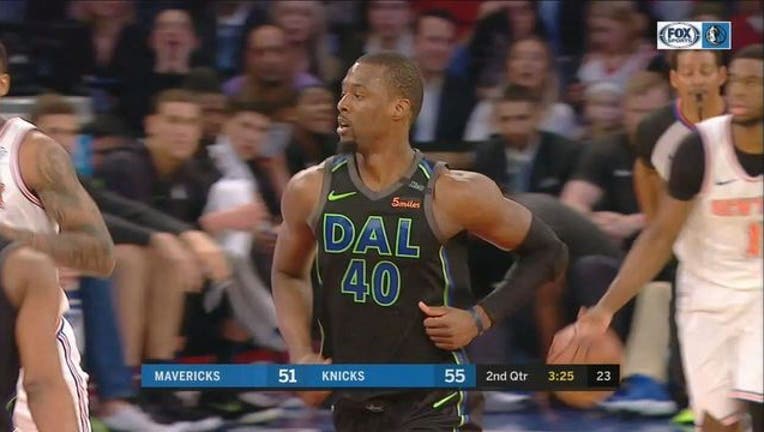 NEW YORK (AP) - Harrison Barnes scored 30 points and the Dallas Mavericks turned around the game in the third quarter on their way to a 110-97 victory Tuesday night over the New York Knicks, who lost their eighth straight game.

Dallas couldn't stop New York early, and then dominated the second half to win for the third time in four games, with only a loss to NBA-leading Houston in that stretch.

Rookie Dennis Smith Jr. added 17 points for the Mavs and Dirk Nowitzki had 13. Yogi Ferrell finished with 10, but eight came during a game-changing 14-0 run in the third quarter.

Michael Beasley scored 21 and Tim Hardaway Jr. had 19 for the Knicks, who got a visit from Kristaps Porzingis before the game and then showed again that they have no hope of winning without him. They lost for the 16th time in 17 games, most coming since their All-Star forward tore his left ACL on Feb. 6.

This one looked as if it could be different when the Knicks made 17 of their first 24 shots against a defenseless Dallas defense. But the Mavs made enough shots of their own to stay in the game, then surged ahead after halftime.

It was tied at 64 before Barnes scored on a follow shot to start the 14-0 spurt that included two 3-pointers and another basket by Ferrell.

New York closed within four in the fourth quarter as Trey Burke led a rally, but Smith made a 3-pointer and Barnes followed with four straight points to put it away.

Mavericks: Dorian Finney-Smith started after sitting out against Houston while continuing his recovery from left quadriceps tendinitis.

Knicks: Enes Kanter (back spasms) and Lance Thomas (sprained right thumb) were back in the starting lineup. ... The Knicks signed F Troy Williams for the rest of the season after the expiration of his second 10-day contract. Williams averaged 8.1 points in eight games after signing the initial contract on Feb. 21.

Porzingis said Tuesday there is no timetable for his return from his knee injury, which will keep him out the remainder of this season and at least some of the next. The All-Star forward was hurt upon landing after a dunk against Milwaukee on Feb. 6. The 7-foot-3 forward said there was sharp pain when the injury happened, but that he quickly felt better and thought he'd be able to go back into the game. But doctors sent him for testing, which revealed the tear.

"I was shocked at first. I couldn't believe that it happened to me, and then about 30 seconds later I said, 'OK, what can I do now?'" Porzingis said. "Now it's just time for me to make a comeback and then I focused on the next thing, and that was prepare myself for the surgery."

The Mavericks won the lottery Tuesday for the first pick in the inaugural NBA 2K League draft. Mavs Gaming will select first in the April 4 draft at Madison Square Garden, followed by Celtics Crossover Gaming and Jazz Gaming. Knicks Gaming will select ninth in the 17-team esports league.