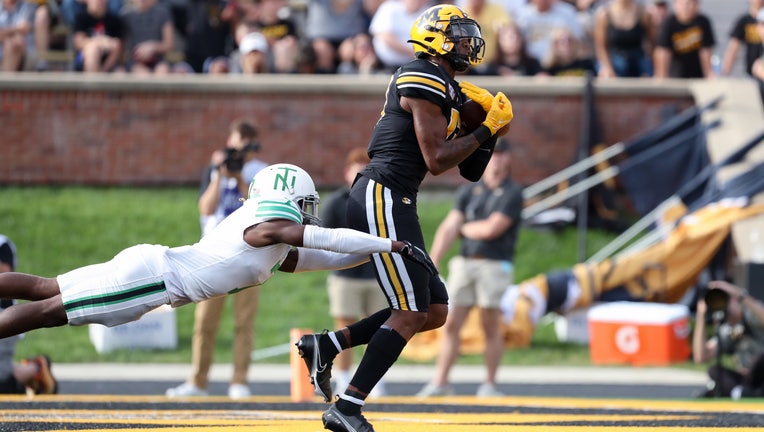 COLUMBIA, MO - OCTOBER 09: Missouri Tigers wide receiver JJ Hester (13) makes a catch for a 48-yard touchdown in the second quarter of a college football game between the North Texas Mean Green and Missouri Tigers on Oct 9, 2021 at Memorial Stadium i

COLUMBIA, Mo. (AP) - Tyler Badie rushed for a career-high 217 yards and scored three touchdowns to lead Missouri to a 48-35 victory over North Texas on Saturday.

Badie is the only player in school history with more than 1,000 career rushing and receiving yards, and he showed his receiving skills in the first quarter with a toe-tap in the end zone while he hauled in 3-yard scoring pass from Connor Bazelak.

He later ripped off a 52-yard touchdown run in the second quarter to help the Tigers (3-3) build a 31-7 halftime lead. Badie averaged 12.8 yards per carry and had four runs of at least 30 yards.

Bazelak completed 21 of 32 passes for 160 yards and two touchdowns, including a 41-yard scoring pass to JJ Hester. Dawson Downing put the game away in the final four minutes with a 60-yard touchdown run.

The Mean Green (1-4) outgained Missouri 491-476 but were foiled by three turnovers, including a tipped interception that defensive tackle Mekhi Wingo returned 40 yards for a touchdown in the fourth quarter. Austin Aune completed 16 of 26 passes for 305 yards and four touchdowns. DeAndre Torrey rushed 24 times for 84 yards and caught a 35-yard touchdown pass.

North Texas: Against a Southeastern Conference opponent, the Mean Green made too many unforced errors and dug an early hole. North Texas lost more than 30 yards of field position when it was penalized for having two players wearing No. 14 on the punt return team. In the second quarter, Missouri faced a third-and-10, but North Texas jumped offsides twice in a row to give the Tigers a first down. Those mistakes led directly to Missouri touchdowns. The Mean Green did show impressive fight in the second half with big plays in the passing game.

Missouri: After giving up 62 points and 683 yards to Tennessee, Missouri coach Eli Drinkwitz fired defensive line coach Jethro Franklin and replaced him with Al Davis. The Tigers, who rank last among FBS teams in rushing defense, still have a lot of work to do. They gave up 35 points and nearly 500 yards to a North Texas team that had scored a combined 35 points against three FBS opponents before Saturday. But at least the Tigers created turnovers and spent a lot of time in the Mean Green’s backfield, making 10 tackles for loss.

Missouri: The Tigers finish a three-game homestand against Texas A&M on Oct. 16.