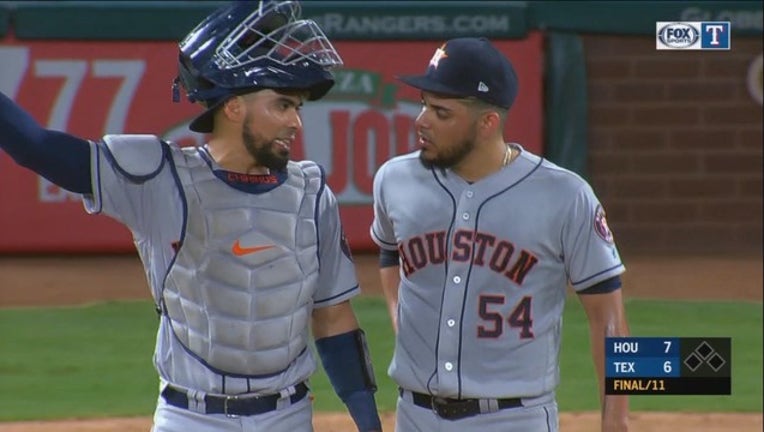 ARLINGTON, Texas (AP) - While Jose Altuve had the tiebreaking two-out double in the 11th inning, he gave most of the credit to George Springer for putting the Houston Astros ahead for good.

Springer scored from first base and Altuve then came home on a single by Myles Straw as the AL West-leading Astros beat the Texas Rangers 7-6 on Saturday night.

"We lost the first two games here so we were trying to win a game and get some momentum," Altuve said. "I just wanted to put the ball in play. When I hit it, I didn't think George was going to score, but what he did was amazing. I hit the ball good, but probably 50 percent or more of the play was on him. I think we won because of him."

Springer drew a two-out walk off Brett Martin (1-1) before Altuve drove a ball into the left-center gap for his fourth hit. Straw, who got picked off to end the ninth after entering the game as a pinch-runner for All-Star outfielder Michael Brantley, made up for that miscue with his hit after the Rangers intentionally walked Alex Bregman.

"You want to redeem yourself, and to get out there and get that, that insurance run. Obviously we needed it. ... It was awesome," Straw said.

Texas had won Friday night on Danny Santana's game-ending RBI liner to center that tipped off the end of Springer's glove while he made a full-out diving try to catch it.

Shin-Soo Choo marked his 37th birthday with a leadoff homer for the Rangers, but he got stranded at second base in the 10th after he drew a one-out walk and went to second on a wild pitch by Josh James (4-0).

Roberto Osuna worked the 11th for his 20th save in 23 chances, even though Nomar Mazara had a leadoff double and came home on two-out infield single by Delino DeShields. Santana struck out before Elvis Andrus flew out to center.

"It was a great win," Bregman said. "Great team effort, everybody contributed from top to bottom."

Bregman needed four stitches on his chin and had to clear concussion protocol after getting hit by a groundball that took a nasty hop when he was playing shortstop in the third inning of the series opener Thursday. Bregman didn't play Friday.

Bregman's 24th homer was a game-tying solo shot in the fifth right after Altuve was thrown out trying to stretch his hit to left into a double. All-Star outfielder Joey Gallo got his eighth outfield assist and second baseman Santana did a nice job on the tag while keeping Altuve from the bag.

"We could easily talk about missed opportunities or mistakes, but we hung in there and I'm proud of our guys for being able to just get through the game and get a win, in a game where we didn't play our best," manager AJ Hinch said. "Perseverance went a long way tonight."

All-Star lefty Mike Minor, making his first start for the Rangers in 11 days, struck out seven in five innings. But he allowed four runs on six hits and three walks.

"I feel like there are lapses in there in focus or something," Minor said. "I am not throwing the put-away pitch. I feel like I served them up a little bit tonight. I hate feeling like this."

Houston scored twice in the first, but Astros left-hander Wade Miley quickly surrendered that lead when Choo and Santana had back-to-back homers. But he made it into the seventh before DeShields went deep to tie the game at 5. Miley gave up only four hits, those three solo homers and a double to Santana.

Astros: SS Carlos Correa, on the IL since May 27 because of a fractured rib, is expected to join Triple-A Round Rock to begin a rehab assignment as early as Monday. ... RHP Brad Peacock, out since June 28 with right shoulder discomfort, threw a bullpen Friday and is penciled in to start for the Astros on Monday at the Los Angeles Angels. ... INF Aledmys Díaz (left hamstring strain) ran the bases before Saturday's game, and is set to start a rehab assignment with Round Rock on Monday.