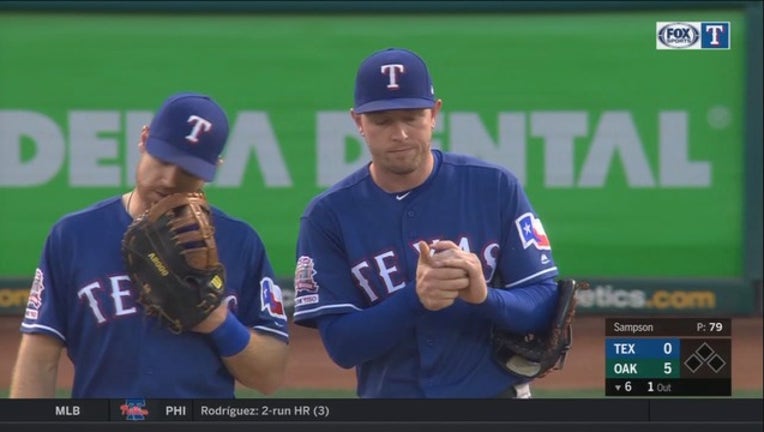 "The pitching coach (Julio Rangel) went up there two pitches before so that's a little suspicious," Laureano said after the Athletics posted a testy 5-4 win over Texas on Saturday night. "But hey, it is what it is. Just keep playing ball. We got the win."

Laureano's trot after hitting a towering homer off starter Adrian Sampson in the sixth stirred strong feelings between the two clubs stemming from an incident in June. As Sampson came off the mound and yelled this time, Laureano pointed to his bat, then headed toward first.

"I guess that's what they do here, look at their homers too long," Sampson said. "I don't believe it belongs in this game and I let him know."

Umpires eventually stepped in as the two continued to exchange words, and plate ump Sean Barber warned both teams.

Things got more heated two innings later and both dugouts emptied after Laureano was hit by a pitch from Montero. Barber ejected Woodward and Montero.

Woodward said he sent Rangel out to get Montero to slow down his delivery before the reliever hit Laureano.

"We have a runner at first with two outs, the last thing we thought about was trying to hit him right there," Woodward said. "Laureano plays really hard and he's very passionate. A lot of times that passion comes out in ways that will maybe annoy the other team. We have a few guys like that."

It was similar to an incident in June when Sampson took exception to Canha taking his time running after hitting a home run, calling it disrespectful. Laureano accused Sampson of purposely stepping on his bat in the same game after retiring Laureano on an inning-ending play.

Laureano's message to Sampson this time?

"I let him know, 'You remember when you stepped on my bat, so you can step on it again,'" Laureano said.

Bailey (9-7) was winless and had a 10.13 ERA in two starts against Texas earlier this season while still with Kansas City. The right-hander was more effective in an Oakland uniform, allowing three runs and seven hits in 6 2/3 innings. Bailey struck out seven and walked one.

"The stuff today was the guy we were looking for," A's manager Bob Melvin said. "Just one pitch, the split that just didn't quite get down to (Danny) Santana. Other than that he was fantastic."

Liam Hendriks gave up a two-out single in the ninth but struck out Willie Calhoun for his ninth save.

The Rangers trailed 5-0 before stringing together five consecutive hits in a four-run seventh. The inning ended when Elvis Andrus was thrown out trying to score from second by right fielder Chad Pinder.

Oakland acquired left-handed reliever Jake Diekman from the Royals for two minor leaguers. Diekman is 0-6 with a 4.75 ERA in 48 relief appearances this season but has allowed just one run in his last six outings.

Rangers: Edinson Vólquez threw a bullpen before the game. Volquez, 36, has been out since suffering a right elbow sprain April 5. LHP Yohander Méndez (elbow sprain) threw 11 pitches to begin his rehab assignment in the Arizona Rookie League. RHP Luke Ferrell (fractured jaw) played in the same game and threw 15 pitches.

Oakland RHP Mike Fiers (9-3, 3.57 ERA) takes a career-high seven-game winning streak into Sunday's series finale. It's the longest winning streak by an A's pitcher over the last six years. RHP Pedro Payano (1-0, 1.50) is penciled in to start for Texas, although Woodward said he may use an opener before Payano.