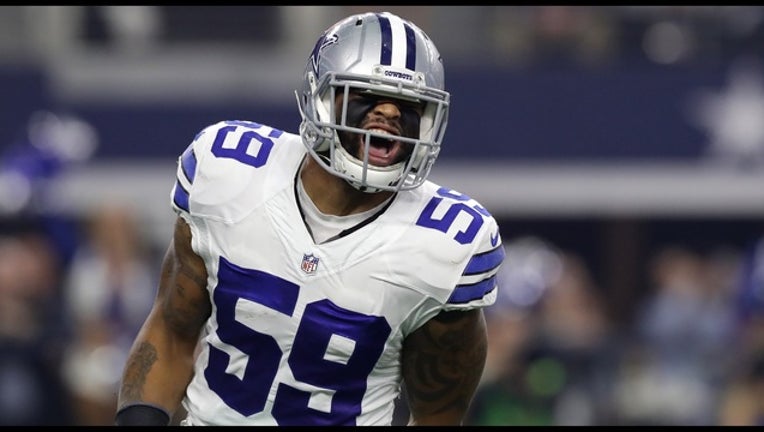 Anthony Hitchens #59 of the Dallas Cowboys celebrates a sack during the first quarter against the Green Bay Packers in their NFC Divisional Playoff game at AT&T Stadium on January 15, 2017 in Arlington, Texas. (Photo by Ronald Martinez/Getty Imag

KANSAS CITY, Mo. (AP) - The Kansas City Chiefs have agreed to deals with wide receiver Sammy Watkins and middle linebacker Anthony Hitchens, filling two of their most glaring needs on the eve of free agency.

The 24-year-old Watkins intends to sign a $48 million, three-year contract with $30 million in guarantees, while the 25-year-old Hitchens agreed to a five-year deal, two people familiar with their decisions told The Associated Press on Tuesday.

The people spoke on condition of anonymity because the contracts, along with several other moves made by Kansas City, cannot become official until the start of the free agency Wednesday afternoon.

The Chiefs have been looking for a playmaking wide receiver to pair with speedster Tyreek Hill since last offseason, but resorted to using Chris Conley in the role. Then Conley went down with a season-ending injury, robbing the Chiefs of their No. 2 wide receiver and forcing journeyman Albert Wilson into a more substantial role in their West Coast offense.

But questions persist about Conley's health and long-term upside, and Wilson has agreed to a free-agent deal with the Miami Dolphins, leaving the Chiefs in the market for a wide receiver.

Watkins was considered one of the premier talents on the market.

The 2014 fourth overall pick of the Buffalo Bills spent last season with the Los Angeles Rams, where he caught 39 passes for 593 yards and eight touchdowns. And while he seems far removed from his best season in 2015, when he caught 60 passes for 1,047 yards and nine scores in a season shorted by injury, the Chiefs undoubtedly believe Watkins has yet to reach his ceiling.

It would help matters if he stayed healthy. Along with a calf strain and ankle sprain that season, he's had hip issues in the past, and missed eight games in 2016 with a fractured left foot.

Buffalo decided to decline its fifth-year option on Watkins after all the injuries, and wound up sending him to the Rams last August for cornerback E.J. Gaines and a draft pick.

On defense, the Chiefs have been trying to get younger across the board, releasing cornerstone linebackers Derrick Johnson and Tamba Hali and shuffling their defensive backfield.

Hitchens, who The Kansas City Star reported will make about $9 million per season, would fill Johnson's spot alongside Reggie Ragland in the middle of the defense. The 2014 fourth-round pick had 84 tackles in only 12 starts last season, when a knee injury sidelined him the first four games.

Hitchens also had a couple of pass deflections and nine tackles for a loss, and showed flashes of the same kind of instincts that made Johnson the Chiefs' career tackles leader.

Watkins and Hitchens are expected to sign their contracts Wednesday, when the new league year means the Chiefs can finally consummate their agreed-upon trades sending quarterback Alex Smith to the Washington Redskins and cornerback Marcus Peters to the Rams.

The Chiefs will get cornerback Kendall Fuller and a draft pick back from Washington and two picks back from Los Angeles, allowing them to restock with younger players through the draft.

Kansas City intends to turn its starting quarterback job over to Patrick Mahomes II, whom former general manager John Dorsey traded up to select 10th overall last year. Mahomes dazzled during training camp and was dynamic in a Week 17 start against Denver, when the Chiefs were already assured of the AFC West title and their playoff positioning, allowing Smith to take the week off.

That performance against the Broncos is what made the Chiefs comfortable moving on from Smith, who had a career season that made him coveted by several other teams in the trade market.