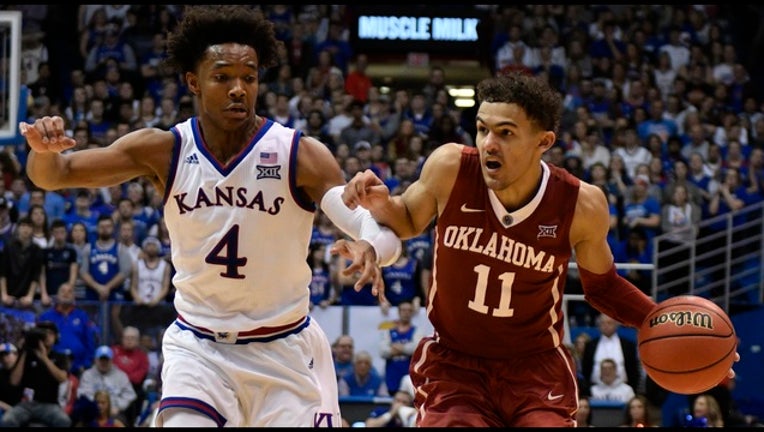 Trae Young #11 of the Oklahoma Sooners drives to the basket as he is defended by Devonte' Graham #4 of the Kansas Jayhawks in the second half at Allen Fieldhouse on February 19, 2018 in Lawrence, Kansas. (Photo by Ed Zurga/Getty Images)

A pair of high-scoring guards who also share the ball with their teammates highlight The Associated Press All-Big 12 men's basketball team.

Kansas senior Devonte' Graham and Oklahoma freshman sensation Trae Young, the league's top two in both scoring and assists, were the only unanimous picks on the AP All-Big 12 first team released Tuesday. They also took the top individual awards.

Graham was named the Big 12 player of the year with his 17.6 points and 7.2 assists per game while helping lead the Jayhawks win their record 14th consecutive conference title this season. He ranked second in the league in both categories behind top Big 12 newcomer Young, the national leader with 27.5 points and 8.9 assists per game .

Kansas' Bill Self took his fourth consecutive coach of the year honor, and seventh in 13 seasons.

Texas Tech senior Keenan Evans, West Virginia senior Jevon Carter and Texas freshman post player Mohamed Bamba were the other first-team picks in voting by a panel of 18 journalists who regularly cover the Big 12 in the league's five states. Bamba is the Big 12 rebounding leader with 10.6 per game.

Graham got nine of 18 votes for player of the year, while Young got seven and Evans two. Young was listed as top newcomer on 14 ballots, including five that also had him as the top overall player.

Self got 10 votes for top coach, while Chris Beard of Big 12 runner-up Texas Tech got seven. The remaining vote went to first-year Oklahoma State coach Mike Boynton after the Cowboys became the first team with a regular season sweep of a Self-coached Kansas team.

Coach of the year - Bill Self, Kansas.