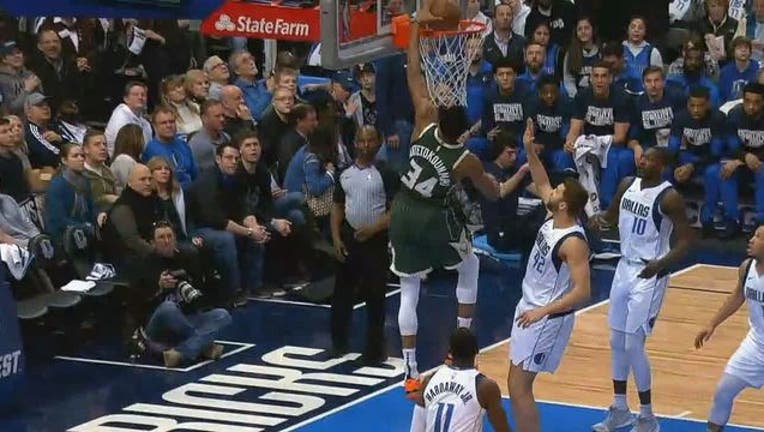 DALLAS (AP) - Giannis Antetokounmpo had 29 points and 17 rebounds and the Milwaukee Bucks rolled to their sixth straight victory, beating the retooling Dallas Mavericks 122-107 on Friday night.

Antetokounmpo was 13 of 19 from the field and got the upper hand again in his second meeting with fellow Euro star Luka Doncic, the Dallas rookie sensation who scored 20 points. He's the only original starter remaining because of two trades that were more about the future than the present.

Brook Lopez scored 20 points for the Bucks, who have surged to the best record in the NBA (41-13) with a pair of six-win runs on either side of a loss. One of those victories was over the Mavericks at home, when Antetokounmpo scored 31 points to Doncic's 18 in a 10-point win.

Milwaukee didn't have Nikola Mirotic a day after acquiring him from New Orleans before the trading deadline. It didn't matter as the Bucks shot 54 percent despite going 10 of 36 (28 percent) from 3-point range.

Antetokounmpo repeatedly powered his way to the basket for dunks and layups, starting with the first two baskets of the game. Lopez found some favorable matchups as well, make six of eight from inside the arc while going 2 of 6 from long range.

Even guard Malcolm Brogdon backed down the Mavericks for easy buckets, finishing with 18 points along with backcourt mate Eric Bledsoe.

Trey Burke, one of four players to join Dallas from New York in a deal that also brought Kristaps Porzingis and sent three Dallas starters to the Knicks, scored 18 points. Tim Hardaway Jr., another guard from that trade, had 12.

Bucks: Guards Eric Bledsoe and Brogdon scored 18 points apiece. ... F Khris Middleton was given a night of rest on the front end of a back-to-back. ... Coach Mike Budenholzer said it wasn't clear whether Mirotic would be available on the second night of a back-to-back at home against Orlando. The fifth-year forward has been listed with a right calf strain and missed his last seven games with the Pelicans.

Mavericks: Antetokounmpo's brother, F Kostas Antetokounmpo, was expected to be active before he was a late scratch because of an illness. The younger Antetokounmpo is a rookie who hasn't played for the Mavericks and has spent most of the season with their G-League team. He was active but didn't play when the teams met in Milwaukee last month. ... Dallas had a season-high 22 3-pointers, going 9 of 16 from long range in the third quarter.

NO RANDOLPH FOR MAVS

Dallas waived Zach Randolph two days after acquiring the forward while sending Harrison Barnes to Sacramento in a trade designed for salary-cap relief. The 37-year-old Randolph never played for the Kings in his second season with them. Justin Jackson, the other player in the deal, made his Dallas debut late in the fourth quarter.

By trading Barnes, the Mavericks put themselves in position to acquire another front-line player to go with rookie sensation Luka Doncic and Porzingis, a 2018 All-Star. Porzingis isn't playing this season as he recovers from a knee injury sustained last February.

Mavericks: Portland on Sunday in finale of three-game homestand.