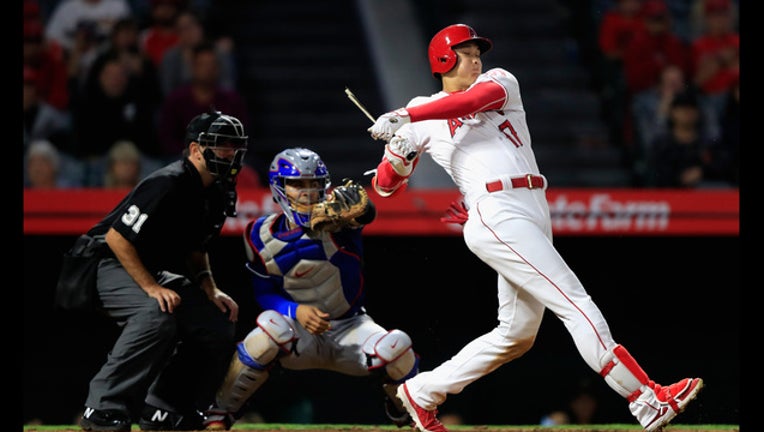 Shohei Ohtani of the Angels breaks his bat on an infield grounder as Robinson Chirinos of the Rangers and umpire Pat Hoberg look on during a game at Angel Stadium on September 25, 2018 in Anaheim, California. (Photo by Sean M. Haffey/Getty Images)

ANAHEIM, Calif. (AP) - Los Angeles Angels two-way star Shohei Ohtani gave yet another glimpse of what he could do at the plate just hours after announcing he planned to undergo Tommy John surgery and return next season only as a hitter.

Ohtani's bat was broken by a Yovani Gallardo slider, but he was strong enough to punch it into center for a single that tied the score and ignite a four-run rally Tuesday to lead the Angels to a 4-1 comeback over the Texas Rangers.

Ohtani, Justin Upton, Taylor Ward and Kaleb Cowart all pushed in runs for the Angels.

Despite being something of a sensation the first half of the season, Ohtani said he doesn't feel he has proven he is a legitimate two-way player.

"It's been a small sample size with just one season, so can't really say I proved to the world that I can continue being a two-way player," Ohtani said.

Texas' Joey Gallo proved his 40-homer season last year was no fluke, hitting his 40th of this season off Matt Shoemaker in the third. Gallo has three more homers than singles (37) this season.

"To do that, and to stay healthy all year, that's hard to do," Gallo said. "You're playing 162 games, and the second year is always toughest. I knew there would be a dip with people making adjustments so it wasn't something where I said 'I'm going to hit 40 again no problem.' "

Gallardo (8-7) looked like he might make the lone run hold up, holding the Angels scoreless on three hits through five innings.

But it all went wrong in the sixth. Kole Calhoun led off with a double, and after he advanced to third on a groundout, Mike Trout was walked intentionally.

That led to Ohtani's single off reliever Martin Perez, before third baseman Jurickson Profar's throwing error on a grounder by Upton allowed Trout to score.

The Angels scored another run after shortstop Elvis Andrus and second baseman Roughed Odor collided going for an Andrelton Simmons bouncer up the middle to load the bases. Ward walked to force in a run.

Cowart lofted a deep sacrifice fly to left that scored Upton and the Angels had a 4-1 lead.

Rangers: LHP Mike Minor has been shut down for the season. Used exclusively as a reliever by the Royals last season, he emerged as the Rangers' most effective starter. He went 12-8 with a 4.18 ERA in 28 starts. The 30-year-old Minor threw 157 innings and that was simply deemed enough for this season.

Angels: Ohtani has decided to have Tommy John surgery next week in Los Angeles by Dr. Neal ElAttrache. The announcement was expected and Angels manager Mike Scioscia confirmed it means Ohtani will not pitch next season.

The two-way star admitted to frustration at not being able to continue as a pitcher next season.

Ohtani said he was uncertain if he would be ready to hit by opening day: "There's no really set date, it's going to depend on how the rehab goes and if there are no setbacks. I'll have an update every four weeks or so after the surgery. I can't give a timetable at this point."

The right-hander gave up only the solo homer to Gallo in his five innings, allowing four hits and striking out seven without a walk. It was the best of his five starts since returning following forearm surgery that forced him to miss most of the season.

It was likely his final start of the season.

"I don't know if there's any more Show has to show this year," Scioscia said.

Said Shoemaker: "Just build off that, go into the offseason and keep getting better."

Rangers: LHP Yohander Mendez (2-2, 6.04 ERA) is scheduled to start Wednesday in the series finale. He will be making his fifth career start after allowing a career-high in runs (eight) and hits (nine) in his last start against the Rays.

Angels: LHP Andrew Heaney (9-10, 4.21) will attempt to even his record in his final start of the season. He'll have to do it against a Rangers team he's gone 1-3 against with a 7.50 ERA against in six career starts.