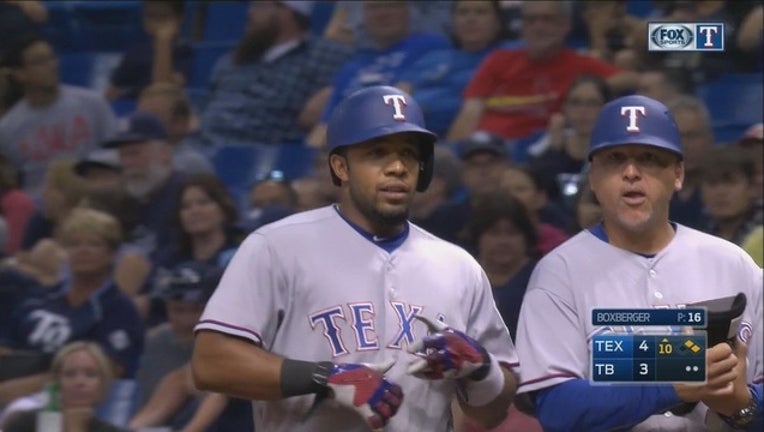 ST. PETERSBURG, Fla. (AP) - Elvis Andrus homered early, and then snapped a 10th-inning tie with a two-out infield single that gave the struggling Texas Rangers a 4-3 victory over the Tampa Bay Rays on Friday night.

Andrus, who homered in the first inning, hit a sharp grounder off Brad Boxberger (2-1) that forced Evan Longoria to make a diving stop. Pinch runner Delino Shields scored when the third baseman to was unable to complete the throw to first base.

Alex Claudio (2-0) pitched two innings in relief of Yu Darvish to help Texas stop a five-game losing streak. The left-hander gave up a leadoff single to Steven Souza Jr. in the 10th, but avoided further damage by getting Adeiny Hechavarria to bunt into a double play and Mallex Smith to fly out.

Rays starter Alex Cobb took a three-hitter and a 3-1 lead into the ninth, but couldn't finish off the Rangers, who erased their deficit with Joey Gallo's double and Shin-Soo Choo's 14th homer within a three-pitch span.

Other than allowing a trio of solo homers, Darvish was outstanding for the Rangers.

The All-Star right-hander yielded five hits, walked one and struck out 12 over eight innings, yet was in line to drop a career-high fifth consecutive decision before the Rangers rallied against Cobb in the ninth.

The Rays built their lead on homers by Brad Miller, Corey Dickerson and Smith, whose eighth-inning shot made it 3-1.

Things shifted quickly when manager Kevin Cash decided against turning the game over to closer Alex Colome, who leads the AL with 26 saves, to begin the ninth.

Rangers: Manager Jeff Banister said Joey Gallo, who has been slowed by a sore left hamstring, is not ready to play on a regular basis in the outfield. Gallo is playing first base and DH.

Rays: Souza, who injured his left hip sliding Wednesday, was out of the lineup but pinch-hit in the 10th. ... CF Kevin Kiermaier, who's missed 35 games with a broken right hip, says his rehab has been "pretty much pain free" and expects to return in early to mid-August.

Attendance was announced as 24,461, up nearly 9,000 from Tampa Bay's average home attendance of 15,681, which ranks last in the majors. Friday was the first time the Rays played a home game after the All-Star break while in playoff contention since Sept. 23, 2013. They went on win a Game 163 tiebreaker to claim a wild-card berth that season.

Rangers RHP Andrew Cashner (4-8), who's 1-1 with a 1.98 ERA in two starts this month, goes against Rays RHP Chris Archer (7-5) Saturday night. Archer has worked at least six innings in 11 consecutive starts, the longest streak of his career.