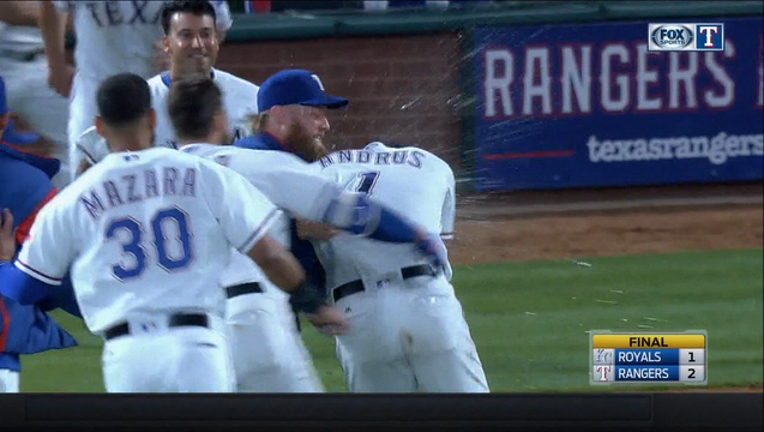 ARLINGTON, Texas (AP) - Rougned Odor got a stolen base when Elvis Andrus swung and missed on a hit-and-run play for the Texas Rangers in the bottom of the ninth inning.

Andrus then got a game-winning RBI, knocking in Odor with a single as the Rangers beat Kansas City in their last at-bat for the second time in three games, winning 2-1 on Saturday night.

"You can tell on the hit-and-run attempt that the ball was running in on him a little bit," Texas manager Jeff Banister said. "But (he) settled himself down and stayed engaged in the at-bat."

Odor led off the ninth with a sharp single off Travis Wood (0-2), who didn't face another batter before Peter Moylan took over and gave up the hit to Andrus.

Mike Napoli homered for the Rangers, who have won three straight for the first time this season. They go for a four-game sweep on Sunday, and have won nine in a row against Kansas City.

"It feels amazing. It's about winning, especially being able to win another series," Andrus said. "Our pitching was amazing."

Matt Bush (1-0) threw a scoreless ninth with a strikeout.

Both starting pitchers, Ian Kennedy for Kansas City and Nick Martinez for the Rangers, allowed one run on four hits over seven innings. Martinez took a no-hitter into the sixth inning of a spot start.

"As good as I've seen him pitch," Banister said.

Kansas City's first hit came with one out in the sixth when No. 9 batter Drew Butera grounded a single through the left side of the infield on a ball that hit the gloves of two diving infielders, third baseman Joey Gallo and Andrus at shortstop.

Mike Moustakas drove in Butera with a one-out single.

Martinez matched his longest outing in 51 major league starts after getting called up from Triple-A Round Rock when A.J. Griffin was put on the 10-day disabled list because of gout in his left ankle.

"I felt great. Had good rhythm with my mechanics," Martinez said.

Napoli led off the second with his third homer, an opposite-field shot that barely cleared the wall in the right-field corner.

"I thought it went well except for one mistake," said Kennedy, without a win in his four starts despite a 2.08 ERA. "I tried to get a one-pitch out on a fastball. Napoli just got enough on it to get it into that little corner."

Kansas City is hitting .209 with a major league-low 44 runs. Among those struggling are leadoff man Alex Gordon (.176) and cleanup hitter Eric Hosmer (.185, one homer). "It's just tough to put runs on the board when that's happening," manager Ned Yost said.

TWO IN A ROW

Andrus had a defensive gem in the fifth inning. He went way to his right to backhand a grounder, then made the throw with his body falling away from first base to get Whit Merrifield by a step.

Royals: C Salvador Perez was scratched from the starting lineup because of neck stiffness.

Rangers: RHP Sam Dyson (bruised right hand) threw live batting practice and is expected to make a couple of rehab appearances in the minors next week. "His slider was sharper, his sinker was late," pitching coach Doug Brocail said. Dyson lost his closer role with three blown saves and a 27.00 ERA this season. "I've really allowed the last few weeks to overwhelm me in the sense of sitting trying to overanalyze everything," he said.

BACK TO THE ASTROS

Rookie RHP Mike Hauschild cleared waivers and was returned by Texas to the Houston Astros. Hauschild, selected by the Rangers in the Rule 5 draft at the winter meetings, was designated for assignment Thursday after giving up five homers in four appearances.

Royals: RHP Jason Hammel (0-1), who pitched in the NL for the Chicago Cubs the last 2 1/2 seasons, is winless in his last 16 road starts against AL teams since 2013. He got a no-decision April 6 at Minnesota in his only road start since joining Kansas City as a free agent last winter.