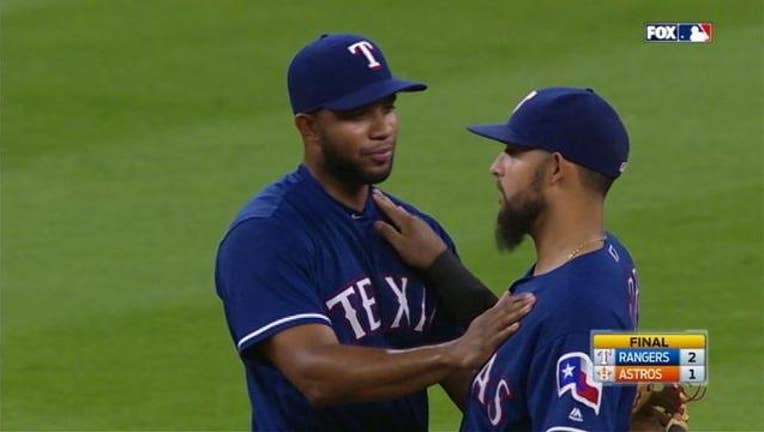 Elvis Andrus hit his first home run of the season to back up the solid night by the pitching staff and help the Rangers edge the Astros 2-1.

Ramos (1-2) yielded two hits and one run while fanning four in six innings for his first win this year in his third start and fifth appearance. Sam Dyson pitched a perfect ninth for his fourth save and second in two games. He was the last of three relievers who offered fastballs in the upper-90s after Matt Bush and Jake Diekman each pitched a scoreless inning to allow the Rangers to hang on for the victory.

"It's a different look," manager Jeff Banister said. "Cesar's more finesse, strikes on the edges and then the combination of the secondary stuff with the off-speed, especially with the slow breaking ball. And then to bring in the power of Bush, Diekman, Dyson, it was fun to watch tonight that trio of pitchers throwing the back end."

The homer by Andrus, which landed in the left-field seats, came with two outs and a full count to put Texas up 1-0 in the second inning. Rougned Odor made it 2-0 with an RBI single in the third.

Marwin Gonzalez solo homer in the third was Houston's only run.

"Ramos mixed and matched and threw different speeds and different pitches and never really doubled up on anything the entire night," manager A.J. Hinch said. "It was too much for us tonight, apparently."

Bush took over in the seventh inning and struck out the first two batters before walking Evan Gattis. Colby Rasmus gave Houston its first hit since the fourth inning with a single after that, but Bush retired Tyler White to end the threat.

Bryan Holaday doubled with one out in the third inning and scored on a single by Odor to make it 2-0. Odor tripped coming out of the batter's box before regaining his footing, but was thrown out trying to stretch his hit into a double.

Gonzalez cut the deficit to 2-1 when he sent one over the wall in left-center with no outs in the third inning for Houston's first hit.

George Springer singled to start the fourth inning to extend his hitting streak to 10 games, but Ramos didn't allow another hit before he was replaced for the seventh inning.

"I just have to mix up my stuff," Ramos said. "I don't have that power arm ... that we have in the back end of our 'pen or the whole bullpen. But they did a great job."

Jose Altuve went 0 for 4 to end a 12-game hitting streak as Houston's offensive woes continue. The Astros have scored just one run in each of the last three games, which were all losses.

Houston center fielder Jake Marisnick made two potentially run-saving catches in the fourth inning with runners on first and second. The first one came when he sprinted to the track in right-center field and stretched out to make an over-the-shoulder catch on a ball hit by Andrus. He did it again minutes later when he dashed into shallow center field and lunged forward to snag a ball hit by Nomar Mazara to end the inning.

Rangers: OF Shin-Soo Choo was feeling better Saturday after leaving Friday night's game in the third inning with tightness in his left hamstring. Banister wants to be careful with Choo since he just came off the disabled list Friday after sitting out since April 9 with a strained right calf. "We're going to give it a couple of days and see if it calms down and see where he's at," Banister said.

Astros: OF Carlos Gomez (bruised left ribcage) worked out at Minute Maid Park on Saturday and is expected to begin a rehabilitation assignment with Double-A Corpus Christi on Tuesday. Hinch said he'll play a few games there, getting some work in center field and as the designated hitter.

Rangers: Cole Hamels (4-0, 3.10) looks to extend his career-best winning streak to 12 games when he starts on Sunday. Hamels did not factor in the decision in his last outing after allowing nine hits and four runs in 6 2/3 innings of an 8-5 loss to Oakland on Tuesday.

Astros: Dallas Keuchel (2-5, 5.43) will make his 10th start of the year on Sunday. Last year's American League Cy Young winner will try to snap a four-game skid and pick up his first win since April 15.