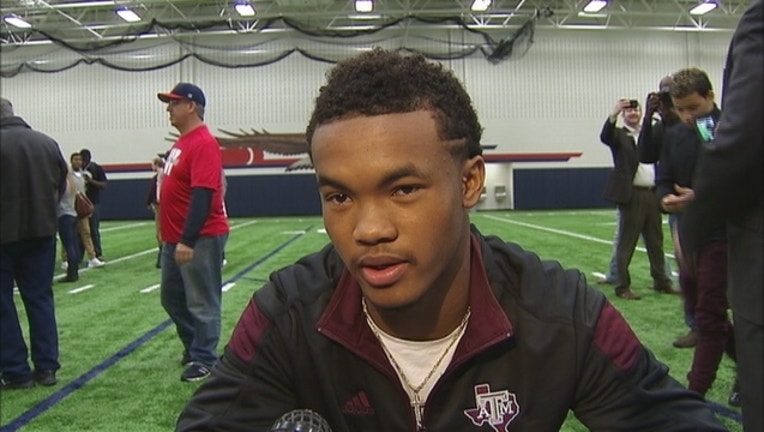 But that doesn't mean this year's job will simply be handed to him. Especially with a talented freshman suiting up for the Aggies in Kyler Murray.

"He (deserved) to start off coming into camp as the No. 1 guy," coach Kevin Sumlin said of Allen. "But ... the thing that's going to make this team better is competition."

He'll get it from Murray, who went 43-0 in leading his high school in Allen, Texas, to three state titles. Murray is the son of Kevin Murray, who played quarterback for the Aggies from 1983-86 and was inducted into the Texas A&M Athletic Hall of Fame in 1999. The younger Murray threw for 14,500 yards and scored 186 touchdowns in his three championship seasons.

"We don't recruit guys to come here and stand on the sideline and you get better by playing so that kind of competition is going to be pretty stiff," Sumlin said.

After turning in one of the most dominant careers in recent Texas high school football history, the expectations are high for the 5-foot-11 Murray, with some already comparing him to 2012 Heisman Trophy winner Johnny Manziel.

"That's going to happen just because of his stature and his style," Sumlin said. "He can throw it, he runs around, he extends plays, he moves well. A play extender. That's kind of the standard comparison across the country for a guy who can move around and extend plays. I wouldn't put a whole lot into it except that it is a comparison."

The Aggies finished 8-5 last season and were 3-5 in SEC play. Allen started the last five regular-season games and threw for a season-best 294 yards to go with five touchdowns in all in a victory over West Virginia in the Liberty Bowl.

Some things to know about the 2015 Aggies:

GARRETT'S GROWTH: Defensive end Myles Garrett had 11 1/2 sacks last season to break the SEC record for freshmen previously held by Jadeveon Clowney. But he was slowed in the second half of the season by a torn ligament in his left thumb that left him unable to use that hand. He had surgery to repair the injury this offseason and is eager to build on his success this year.

"I don't feel like I had a good enough season for myself," he said. "I didn't reach my own standards so I'm just ready to get out there and prove I can be better."

Asked why he wasn't satisfied with a season where he was named the team's defensive MVP, Garrett answered simply.

"If I'm not the best d-lineman, that's not good enough for me," he said.

Sumlin hopes he can be a leader for his team this season and has talked at length with him about embracing that role.

"Because of his talent and ability, when he talks, guys are going to listen," Sumlin said.

NEW COACHES: The Aggies have a trio of new coaches this season led by defensive coordinator John Chavis, who left LSU to replace Mark Snyder after he was fired in November. They also added former Utah offensive coordinator Dave Christensen as their offensive line coach and running game coordinator and Aaron Moorehead, who won a Super Bowl as a player with the Colts, as their receivers coach.

KYLE FIELD MAKEOVER: A two-year redevelopment of Kyle Field will be unveiled prior to A&M's home opener against Ball State on Sept. 12. The $485 million project to upgrade the stadium, which was opened in 1905, has increased its capacity to 102,512, to make it one of the five largest college stadiums.

HOME AWAY FROM HOME: The Aggies open the season against Arizona State on Sept. 5 at NRG Stadium, home to the Houston Texans. While it isn't exactly a home game for Texas A&M, it might as well be, with the stadium situated just over 100 miles from Kyle Field.