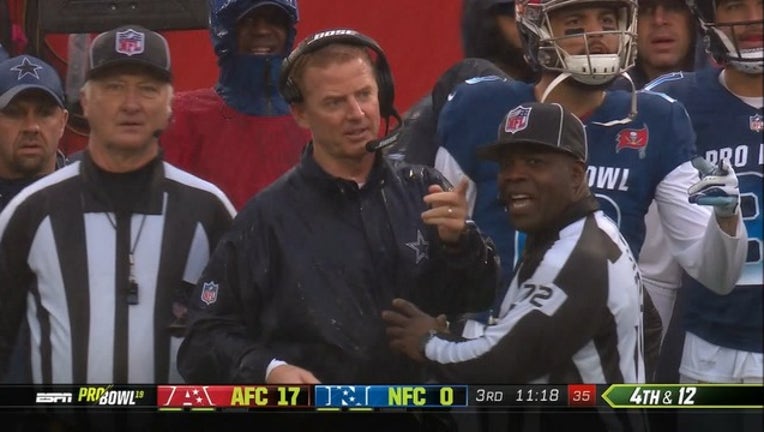 ORLANDO, Fla. (AP) - The Pro Bowl has long been considered a laughable representation of the NFL game.

It reached a new level of comedy Sunday as several players swapped positions during the annual all-star game.

Jacksonville Jaguars cornerback Jalen Ramsey caught a touchdown pass in the final minute, capping a dominant performance for the AFC defense in a 26-7 victory over the NFC in steady rain. It was the third consecutive victory for the AFC, all of them at Camping World Stadium.

The last two were played in sloppy weather, with the latest one also coming amid temperatures in the mid-50s. It was far from ideal conditions, raising speculation about the game's future in Orlando, but fairly fitting considering the effort players provided. It was two-hand touch most of the day, with officials blowing plays dead at the slightest hint of contact.

"Who cares, man?" New York Jets safety Jamal Adams said. "At the end of the day, we're like little kids out there just playing in the mud, playing in the rain."

Regardless of the elements, the AFC made the plays the NFC didn't.

Kansas City's Patrick Mahomes completed an 18-yard touchdown pass to Indianapolis' Eric Ebron on the opening possession, helping Mahomes earn the offensive Most Valuable Player award. Mahomes pleaded with voters to give it to Chiefs fullback Anthony Sherman, who caught three passes for 92 yards and ran for a score.

"Sherman had my vote. Sherman had my vote," said Mahomes, who completed 7 of 14 passes for 156 yards. "I thought I told everybody on the camera. He made some plays out there. For a fullback, we have one of the best in the league so I'm always happy to try to get him a little vote like that."

Adams, who made headlines for sacking the New England Patriots mascot during a Pro Bowl skills competition, was named the defensive MVP thanks to an interception and a sack.

"It's a great achievement, but the main thing was to come out here and get the victory," Adams said. "That was the main thing, just to get the money, man. That's what we wanted."

Mahomes and Adams each got a luxury vehicle.

The AFC defenders earned their share of the pot. The conference allowed the NFC 148 total yards and 10 first downs while intercepting three passes and notching seven sacks.

"Man, me and Deshaun, that's my brother from another mother," Ramsey said. "We've been plotting and scheming all week, manifesting, and it just came about."

The AFC led 20-0 early in the fourth quarter, looking like it might record the first shutout in Pro Bowl history. But Dallas' Dak Prescott found Atlanta's Austin Hooper for a 20-yard score on fourth down with 9:09 remaining.

The NFC had plenty of chances before that. The conference failed to score on a fourth-and-goal run early. Chicago's Mitchell Trubisky, Minnesota receiver Adam Thielen and Prescott threw interceptions.

Trubisky was sacked by Adams on a flea flicker, and Dallas' Amari Cooper had a wide-open touchdown pass bounce off his face mask.

Adams' hit on the Pats mascot went viral, leading to false reports about the guy being hospitalized.

"It's dying down now," Adams said. "He never went to the hospital. They blew it up. It was all for the fans. I gained some fans and I gained some enemies, put it like that."

Indianapolis Colts tight end Eric Ebron had his phone tucked into the pocket of his sweatshirt and used it between the third and fourth quarters. Ebron took pics with opposing players, working his way around the entire NFC defense.

Players from both conferences spent the week lamenting a now-infamous no-call in the NFC title game.

Pittsburgh Steelers receiver JuJu Smith-Schuster and Los Angeles Chargers receiver Keenan Allen left the game with bruised knees. Neither was considered serious, although Smith-Schuster was limping on the way to the bus and declined comment. Allen caught four passes for 95 yards before sitting out.

New England and the Los Angeles Rams play in the Super Bowl next Sunday.