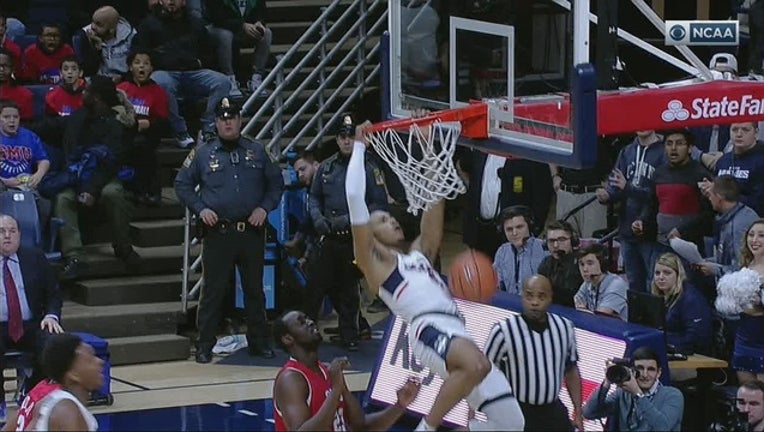 Josh Carlton added a season-high 12 rebounds for the Huskies (11-9, 4-3), who used a 19-4 second-half run to secure much-needed conference win after losing back-to-back games by at least 20 points.

UConn led by three points at half.

The Huskies outscored SMU 21-5 off turnovers, despite getting just one more giveaway (10-9).

SMU: The Mustangs dressed just eight scholarship players. They lost second-leading scorer and leading rebounder Jarrey Foster to a left knee injury in their upset win at Wichita State last week. Everett Ray, a 6-7 freshman, also went out for the season when he broke a foot warming up for Saturday's game against Tulane.

UConn: The Huskies found out Thursday that they had lost their appeal to have forward Sidney Wilson declared eligible this season. The highly touted 6-foot-7 freshman transferred to UConn after briefly attending summer school at St. John's. Wilson will have four year's' of eligibility beginning next season and will be allowed to continue practicing with the team. UConn also played Thursday without Terry Larrier, who underwent surgery this week to repair a fractured sinus wall. The 6-8 swingman, who had been averaging just under 15 points a game, is expected to miss at least a week.

SMU: The Mustangs head home for a Sunday game against East Carolina

UConn: The Huskies travel to Philadelphia for a game on Sunday against Temple