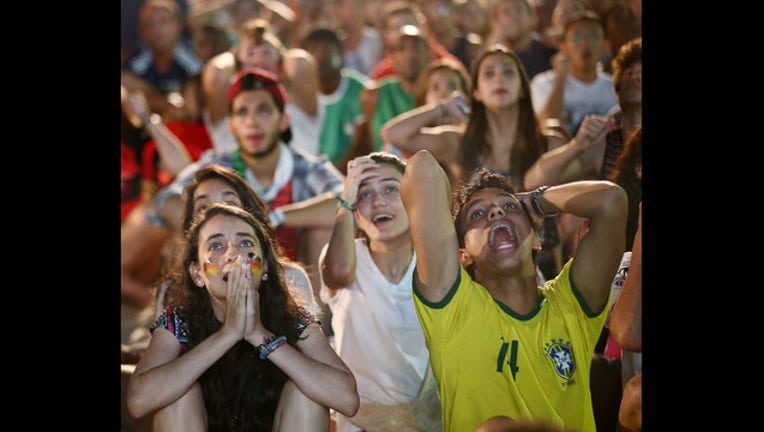 Fans react during the Germany-Algeria match at FIFA Fan Fest during the 2014 FIFA World Cup on Copacabana Beach on June 30, 2014 in Rio de Janeiro, Brazil. (Photo by Mario Tama/Getty Images)

(WJBK) - It's called the beautiful game for a reason.

And that doesn't just apply to the moves on the pitch. As the 2018 FIFA World Cup unfolds, heartwarming moments and gestures from fans across the globe show us what this tournament is all about.

This moving photo has been shared thousands of times around the globe as it reminds us that compassion knows no team. It shows Colombian and Mexican fans lifting an Egyptian fan in a wheelchair in the fan zone of the FIFA fan fest so he can watch his team play, beautifully capturing the spirit of the World Cup.

Instead of immediately taking off to celebrate a historic win against Poland on June 19, Senegal fans stuck around Otkritie Arena to clean up their section of the stadium.

These fans not only stole the Internet's hearts for their animated spirit and impressive costumes, but also this class act. It was a simple gesture, but clearly one that struck a chord.

Any they weren't the only ones:

One young Poland fan was having a tough time after Poland was eliminated from the World Cup on Sunday. But fans from the opposing Colombia were kind, trying to cheer him up with comforting pats and head rubs.

Not to worry, he posted this follow up of the little guy the next morning:

Now called the "La Abuelita de Mexico" or the "Granny of Mexico," you can learn more about her on her new website abuelitademexico.com.

Unbridled joy from a group of schoolkids in Uruguay celebrating the team's late goal -- a header from Jose Gimenez -- against Egypt. The group erupted, the ecstatic chaos spilling out into the playground as kids rejoiced in the win.