The World Cup starts in two weeks, and while soccer fans are excited for the start for the tournament, there was something else they were pumped about Sunday, when the World Cup trophy stopped in Dallas.

DALLAS - The World Cup starts in two weeks, and while soccer fans are excited for the start for the tournament, there was something else they were pumped about Sunday, when the World Cup trophy stopped in Dallas.

The 2022 World Cup will be airing on FOX 4 here in North Texas and on FOX stations across the country, but as ready as soccer fans are for the tournament, many in North Texas are looking even further ahead.

A trophy only held by the best-of-the-best in soccer was in Dallas on Sunday ahead of the 2022 FIFA World Cup.

Soccer fans like Carolina and her 11-year-old brother, Emiliano, are ready.

The trophy was in town for Coca-Cola’s promotion tour prior to the World Cup in Qatar beginning November 20. 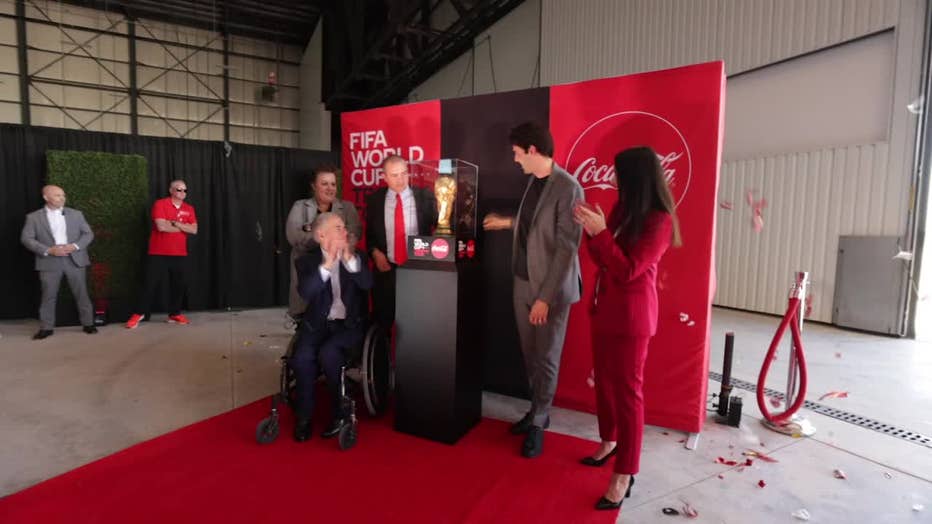 But looking ahead to 2026, there are two Texas cities, Dallas and Houston, that will be hosting World Cup matches.

"This is like the Super Bowl on steroids," FC Dallas President Daniel Hunt said.

Hunt, who’s also chairman of Dallas’ 2026 World Cup bid, says we’ll be guaranteed four matches at AT&T Stadium, but there could be semifinals matches, and even a final.

"And we’ll know in third or fourth quarter of 2023 what other matches we’ll get," Hunt explained.

"I will watch every game that I can get on my TV at any given moment," Jergensen said.

Jergensen is ready for this year’s matches, but he’s even more ready to buy tickets for the 2026 games in Dallas.

Retired soccer greats are also in town for the trophy tour.

"When I look to that trophy, I feel joy, I feel proud," FIFA World Cup Champion Kaka said.

While some fans hope one day they’ll be in that category.