NEW YORK - Wordle, the viral word puzzle that lets players guess a five-letter word in six tries, was recently purchased by the New York Times — leading some players to suggest that the game has become more difficult, while others have noted two different answers in one day.

Wordle’s appeal has been in part due to its simplicity, no bells and whistles or ads or asking for your email address to play — just a website with 30 blank squares and a keyboard. Since its move to the Times, some players have taken to Twitter to complain about some recent words like "ULCER," "ALOFT," and "CYNIC."

But Jordan Cohen, New York Times communications director, said in an email that "no changes have been made to the gameplay itself," something the newspaper previously promised in January during news of the sale. 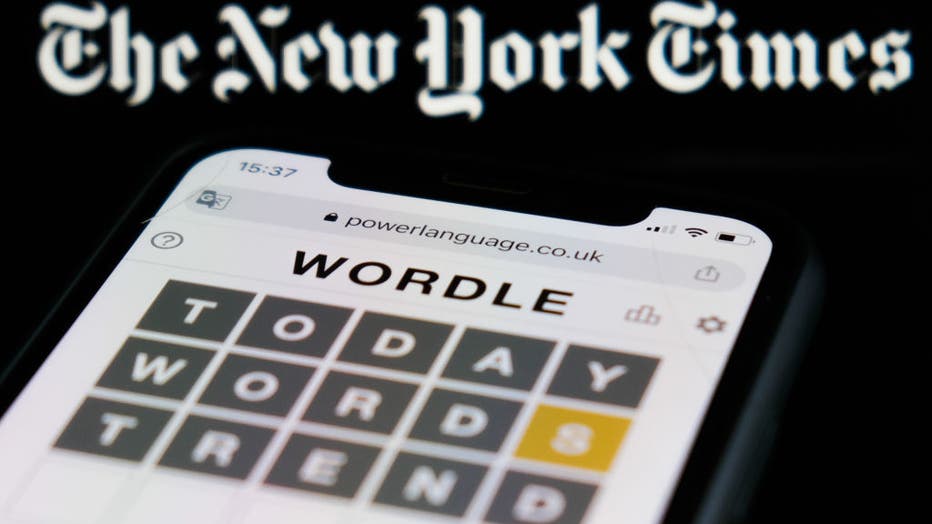 FILE - Wordle game displayed on a phone screen and The New York Times logo displayed in the background are seen in this illustration photo taken in Krakow, Poland, on Feb. 6, 2022. (Photo illustration by Jakub Porzycki/NurPhoto via Getty Images)

Internet sleuths have pointed out how Wordle’s solutions don’t include every single five-letter word in the English language. The game’s original creator, Josh Wardle, previously told the New York Times that he had his partner — for whom the game was originally created — narrow down the 12,000 or so possibilities to around 2,500 words that she was familiar with.

That same word list makes up Wordle’s solution set, and the list is actually built into the Javascript of the website itself, according to The Verge, which reported that the game’s new owners haven’t added any new solutions yet.

The main change the New York Times has made was removing certain words.

"We are updating the word list over time to remove obscure words to keep the puzzle accessible to more people, as well as insensitive or offensive words," Cohen added in the emailed statement.

There is actually a list of the original Wordle solutions posted online (warning: clicking the link will spoil future Wordle solutions), and players who really want to understand the inner workings of the game can compare the list against the Times’ altered list by following instructions here from PCMag.

As some have noted, those who are still playing the original version of Wordle hosted at the powerlanguage.co.uk/wordle URL may be out of step with other players, The Verge notes.

What is Wordle, again?

To play Wordle now, you have to visit its website and type in a five-letter word.

Also, you can only play once a day.

The popularity of the game has spawned several spinoffs, including a new "Worldle" game that looks like a typo but is intended for geography buffs.