A security fence went up around the Earle Cabell Federal Building. Windows were boarded up as well in anticipation.

The decision from the Conservative majority court removes a woman’s constitutional right to an abortion after 50 years.

During sundown, a few hundred filled with frustration first gathered in Civic Park.

Susan Urrutia is a registered nurse from Rowlett.

"I just needed to be with like-minded people for a while today," she said. "My daughter is 19, and her reality is closer to my mom’s reality than I would have ever thought could happen."

The mother is feeling defeated and disappointed.

Sitting on a nearby bench, a mother-to-be from Arlington fears the future for her child.

"I think it’s a unique perspective as far as being pregnant. That I chose this and anyone should be able to choose," she said. 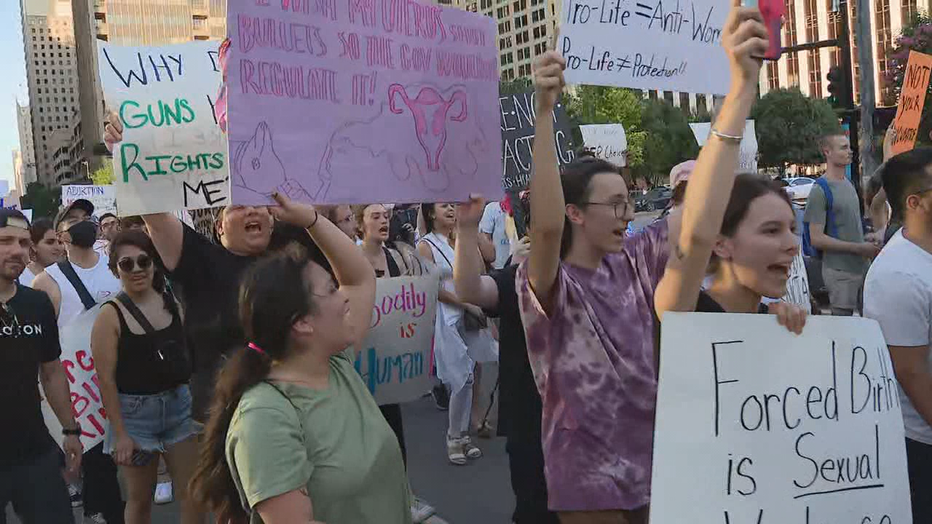 "I am pissed, and I hope other people will get as pissed off as I am," he said. "As a man, I want to stand up and protect women’s rights and draw the line of who can make the decision for her own body. I trust women to do that."

Abortion rights activists drowned out the noise as only a couple of counter protestors stood on the outskirts.

Kimmy Robinson has been inevitably waiting for the ruling after the draft opinion was leaked last month.

"It was really just wow. Can’t believe this happening. I was hoping maybe something would go differently," she said.

State by state: Where abortion will be illegal after Supreme Court ruling

Robinson now stands in a protest she hoped wouldn’t happen but strongly believes the protest Friday will not be the end.

"Right to contraceptives, right to privacy of your marriage and who you marry. It’s much bigger than the moment we are in today," she said. "I am going to stay here and fight. I’ll be here."

There are several more protests planned for this weekend. There is one planned for Saturday in Dallas at 10 a.m. and another in Fort Worth at noon at the Tarrant County Courthouse.