FORT WORTH, Texas - Two people are in custody after Fort Worth police chased a stolen vehicle into Haltom City on Tuesday morning.

Police said they received an alert from their Flock license plate cameras that they detected the stolen car.

Officers found the car and attempted to pull over the car, but it kept going. 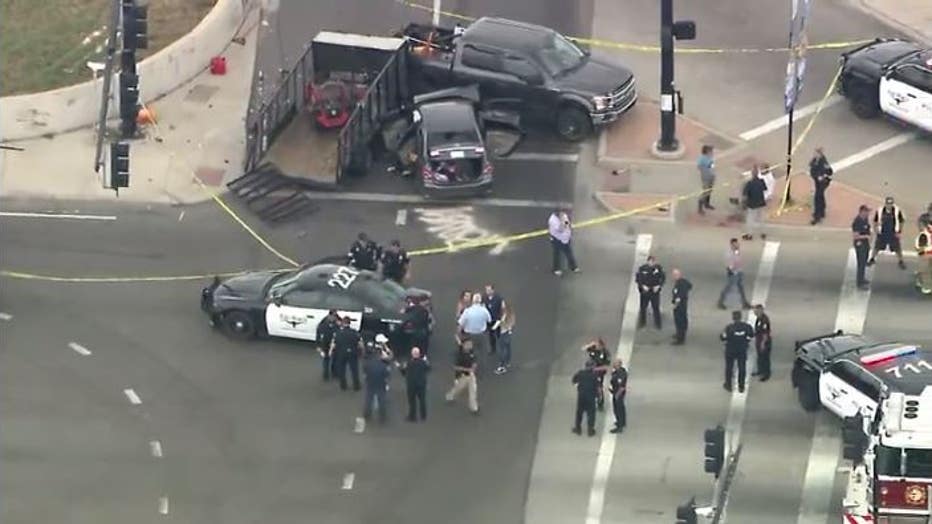 Fort Worth police say a man inside the vehicle began to shoot at the pursuing officers.

Plumber Larry Burdette says he saw the suspects' car pass by while he was at Morey Lumber on 28th Street.

"I heard a gunshot, and I turned towards traffic," he recalled. "And there was a car coming by with a man sitting on the passenger side door, out the window with a shotgun, pointing it at the police chasing him, firing rounds with the shotgun."

Plumber Larry Burdette says he saw the suspect's car pass by with one of the suspects sitting on the passenger side door shooting at police.

Fort Worth Police Chief Neil Noakes says the male suspect and the female driver tried to take off on foot before being taken into custody.

The female driver was arrested for unauthorized use of a vehicle and evading.

The male was arrested for three previous outstanding felony warrants, two for aggravated assault with a deadly weapon and one for unauthorized possession of a firearm by a felon.

Chief Noakes says a handgun and long gun were recovered at the scene. He credits the Flock camera system for helping officers track down a wanted felon.

"The suspect who fired at the officers was someone we had been searching for as part of our violent crime initiative. He was on our radar," he said. "Because of the technology we have with the Flock cameras, we were able to locate the vehicle he was in, take him into custody, but not before officers were shot at."

Despite that, Chief Noakes says none of his officers returned fire.

Police say the two people in the truck that was hit by the chase vehicle had minor injuries.

Rafael Aguirre and some of his coworkers walked outside their car shop saw the Corolla drive by. Surveillance footage appears to show the gunman hanging out the window while firing at trailing officers.

"He shot at least five or six times at them," he recalled. "At the end of the day, I’m just glad no officers were hurt."

The shots alarmed people at businesses as the chase stretched for more than several miles across town. Shell casings scattered across traffic lanes as investigators collect them as evidence. Photographs, measurements and all sorts of investigative tools on display as people in the community watch from afar.

Fort Worth Police give update on police chase

A male suspect who allegedly fired at officers and a female driver were taken into custody.

All of this comes in a violent 72-hour period in Fort Worth with the murders of a 5 and 17-year-old and a chase and crash that ended with an officer-involved shooting.

Chief Noakes had a message to the public.

"For those who want to see results, for those who may not think the violent crime initiative is working, I implore you to look at this," he said. "This happens every day, but you don’t always see it. I could not be more proud of these officers."

Noakes said the suspect is expected to face additional charges for Tuesday's incident.

Both suspects were transported to the hospital for their injuries.

No officers were injured by the gunfire.