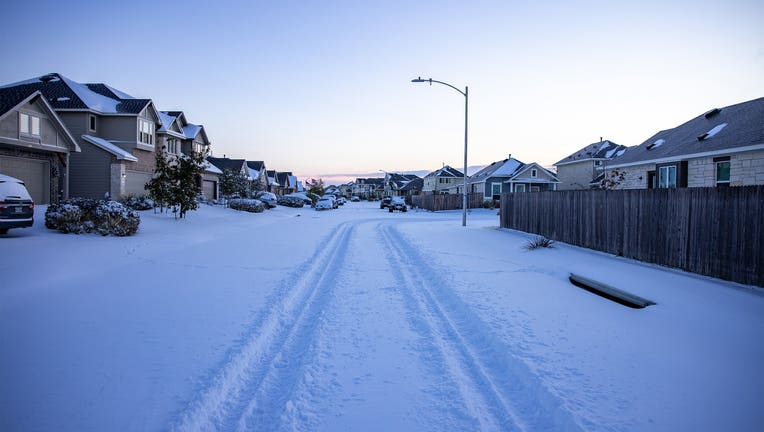 The Blanco Vista neighborhood of San Marcos was blanketed with several inches of snow as a massive winter weather system caused power outages across Texas. (Credit: Jordan Vonderhaar for The Texas Tribune)

A grandmother slept in her car. Parents who ran out of firewood burned belongings to keep their children warm. A Richardson resident watched the battery level of her partner's oxygen machine drain away and desperately sought help to have it recharged.

As Texas utility operators and politicians squabbled over responsibility for "load shedding" and "rolling blackouts" Tuesday, many residents scrambled simply to stay warm and alive.

Millions suffered through Monday night without power as a massive winter blitz sent temperatures plunging, shuttered grocery stores and caused widespread outages. With little certainty of when power would be restored — and politicians angrily blaming the state’s grid operator — thousands were left facing another night in brutal, potentially life-threatening conditions. At least ten deaths have been linked to the disaster, and hundreds of people who live on the streets are being directed to seek life-saving refuge at shelters.

Texas residents said the storm — and ensuing partial collapse of the state's power system — sapped what mental reserves they had left after eleven months of a global health crisis that has cost thousands of jobs and claimed more than 40,000 lives in the state.

"To go through all of that and then also to have stuff like this happen, it's like, ‘One more historical event, and I'm going to develop PTSD,’" said Brianna Blake, 31, a mother of two sons. "I cannot do this."

Blake’s family moved to Texas from Ohio this summer after her husband was laid off due to the pandemic, and a tornado hit their home, destroying nearly "everything."

They tried to stock up on water and firewood after they lost power Monday, but the shelves of local gas stations were cleared out and grocery stores were closed. They couldn’t find a room at hotels in nearby Mathis and Beeville, Blake said.

After losing power Monday, Brianna Blake's family slept in front of their fireplace. 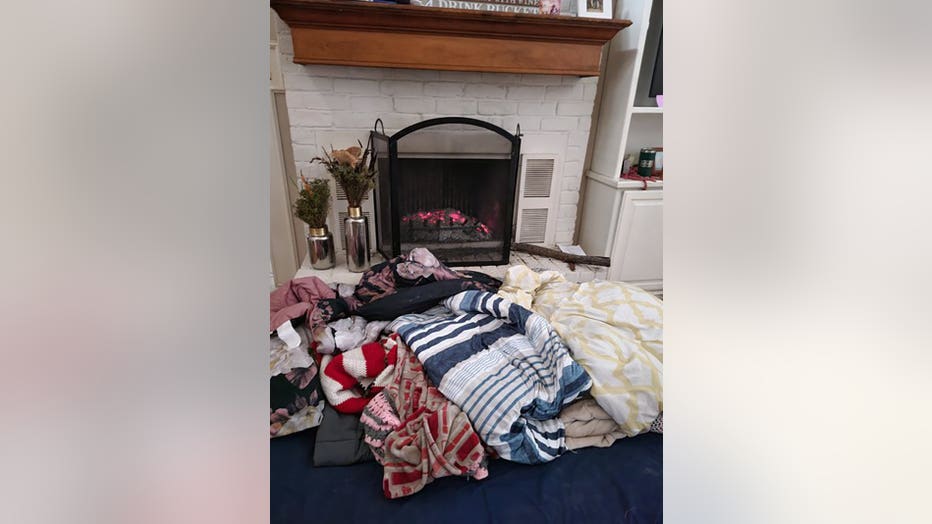 Instead, they nestled a futon mattress and every comforter they owned near the fireplace, and slept in a pile until 3 a.m. when the couple noticed the fire was dying down. In desperation, Blake pulled a piece of canvas artwork off the wall of their Portland home and snapped it. There was "no alternative" to keep the heat going, she said.

It was the "most helpless feeling as a mom" watching her 4-year-old and 7-year-old sons sleep, "blissfully unaware" of what their parents were doing, Blake said.

"The bare minimum is providing them with shelter and warmth and food — that’s our bare minimum job" as parents, she said, growing emotional."It was just heartbreaking to know that ... these boys were going ... to wake up freezing, that they were going to wake up cold, I would have broken every belonging that belonged to me to prevent that from happening."

In East Texas, Lisa Blevins worried the freezing temperatures could hurt her 41-year-old daughter, who has an auto-immune disease that makes her susceptible to becoming severely ill. Blevins, 58, said she couldn’t take her daughter anywhere if she got ill; they don’t want to risk her being infected with the coronavirus.

Blevins’ household — including her husband, daughter, teenage stepdaughter and the stepdaughter’s friend — piled into a family car last night along with one of the family’s three dogs and two cats for a respite from the cold. But they returned to the house and covered themselves with blankets after a few hours, to avoid keeping the car going too long and running out of gas.

"I didn't even have a clue that there was a chance our electric could go off," said Blevins, who blames state leadership for the "poor planning."

Meanwhile, her 34-year-old son huddled his son and wife in front of the gas fireplace to weather the freezing temperatures. His wife has started to get symptoms of a cold.

The power outages have proved particularly disruptive for those who need to charge medical devices.

The machine, which must be charged every few hours, kicked into a backup mode after the power at Ashlynn Hoffner’s apartment went down earlier this week. She called the power company, was placed on a lengthy hold and later called 911.

After guiding two first responders through the darkened apartment with flashlights, Ashlynn Hoffner helped load her partner onto a wheelchair. They were taken to a nearby hospital, and then to a dialysis center where the machine was charged.

Ashlynn Hoffner picked KD Hoffner, 31, up from the center and the couple went to a friend’s house where they were greeted with heating, spicy pasta and power strips.

"I am angry about the whole thing," KD Hoffner said in a text message. The blackouts happened "in the middle of a snowstorm" without "any thought to how it would affect disabled people (nothing new there). We’re also going to have to throw out food because our fridge hasn’t been on for 2 days. I am lucky to have my partner and my friends. Not everyone is that lucky."

The couple will drive to Plano tomorrow so KD Hoffner can get dialysis needed for chronic kidney and heart issues.

"Nobody had anything for us really," Ashlynn Hoffner said of the government’s response. "So we ended up having to fend for ourselves, which was really frustrating."

Many faulted the government for not warning them power could be out for days while the state was swept by freezing temperatures. While most houses in Texas are girded for the sweltering summers, they’re not always insulated to protect against cold weather. Plows and salt used in states that routinely get snow are not common in Texas.

Blake, the mother of the 4-year-old and 7-year-old sons, said the past few days have been a "white knuckle, hang-on-tight" ordeal.

"Fear" was the only word that could describe what the family was feeling, she said in a written message.

Brianna Blake, with husband Marcus Zeigler and their two sons, said it was the "most helpless feeling as a mom" to watch her 4-year-old and 7-year-old boys sleep while the family ran low on firewood.

"My husband and I are fearful that we may endure another night with no power and we've run out of options," she wrote. "When I was in school I remember talking about the Great Depression and seeing a picture of people burning money to stay warm in our history books. At this point I wish I had the $400 on average I spend a month on my [electricity] bill to burn. At least I would be able to keep my children warm."

On Tuesday, the family tried to get gas, but found snaking lines outside two stations. At one Valero they pulled up to around 10 a.m., they neared the front of the queue only to watch a woman place a plastic bag over the pump and say "we’re out," Blake said.

Blake said the local community has pulled together in what has felt like an absence of communication from officials, who initially warned of rolling blackouts lasting just an hour or so at a time.

"This was poorly managed," she said. "It was clarifying, to be honest with you, because now we know when things hit the fan, we're in it alone."

Their power was restored Tuesday afternoon.

Other Texas residents said they felt relatively lucky to have a roof over their heads and food to eat, even if they were freezing without heat or electricity.

Sarra Rushing said she and her family lost power in Channelview at 4 a.m. Tuesday and did not have it back by afternoon. They have sufficient food and water, but limited heat — the only reliable source of heat is their gas stove, but it's too risky to leave it on, she said.

Besides an aunt, who is legally blind and lives alone, Rushing isn’t as worried for her family as she is for those who don’t have similar resources. The local government could have done a better job preparing residents for the storm, she said.

"Everyone knows that some sort of natural disaster is bound to happen every couple of years, and yet every hurricane, flood and falling of snow somehow puts more Texans in terrible circumstances," Rushing told The Tribune in written messages.

Sergio Tristan said the power went out in his Austin neighborhood in the early hours of Monday. Though his family had prepared by buying food and covering pipes, they were expecting minimal power outages — not the 38 hours without electricity he and other residents had experienced by Tuesday evening. He said his family has recharged its phones in their car every 25 minutes.

After almost four days of bad weather, Tristan said the novelty of icy weather has begun to wear off, and now the biggest concern is warmth. He said his two small kids, aged seven and two, are wearing three layers of clothes, and the family is trying to move to stay warm while buckled down in one room.

"I can literally see my breath in my house now. We’ve got to be in the 40s inside my house, easily," Tristan said.

"But we're the lucky ones, right?" he added. "We're lucky we have a home to be inside, we have some food that we prepped a little bit. I think there's just a whole community of people who are not being serviced properly."

Disclosure: Valero has been a financial supporter of The Texas Tribune, a nonprofit, nonpartisan news organization that is funded in part by donations from members, foundations and corporate sponsors. Financial supporters play no role in the Tribune's journalism.

""We’re in it alone": Power outages leave millions of Texans desperate for heat and safety" was first published at https://www.texastribune.org/2021/02/16/texans-weather-power-outage/ by The Texas Tribune. The Texas Tribune is proud to celebrate 10 years of exceptional journalism for an exceptional state.