Less than a week after Hurricane Ida ravaged the Gulf Coast, President Joe Biden was in Louisiana to get an up-close view of the damage and offer assistance from the federal government

The devastation was clear as Air Force One approached New Orleans, with uprooted trees and blue tarps covering shredded houses coming into focus ahead of landing. The path to nearby LaPlace, where Biden was to be briefed by local officials, was dotted with wood poles that held power lines jutting from the ground at odd angles.

"I promise we're going to have your back," Biden said at the outset of the briefing.

His visit comes as an overwhelming majority of homes still remain dark in the state and efforts continue to drain flooded parishes. At least 13 deaths were blamed on the storm in Louisiana, Mississippi and Alabama.

In shirtsleeves and boots, Biden was welcomed at the airport by Louisiana Gov. John Bel Edwards, a Democrat. Several Republicans, including Sen. Bill Cassidy and Rep. Steve Scalise, the House Republican whip, were also on hand.

Biden was meeting with local officials and touring a neighborhood in LaPlace, a community between the Mississippi River and Lake Pontchartrain that suffered catastrophic wind and water damage and was left with sheared-off roofs and flooded homes. He also planned a flyover tour of hard-hit communities including Lafitte, Grand Isle, Port Fourchon and Lafourche Parish, where Parish President Archie Chaisson said 25% of the homes in his community of 100,000 people were gone or had catastrophic damage.

Edwards suggested the visit would be crucial for the president to understand the destruction by seeing the widespread damage for himself.

"There’s nothing quite like visiting in person," Edwards told reporters earlier in the week. "When you see it for yourself, it is just so much more compelling." 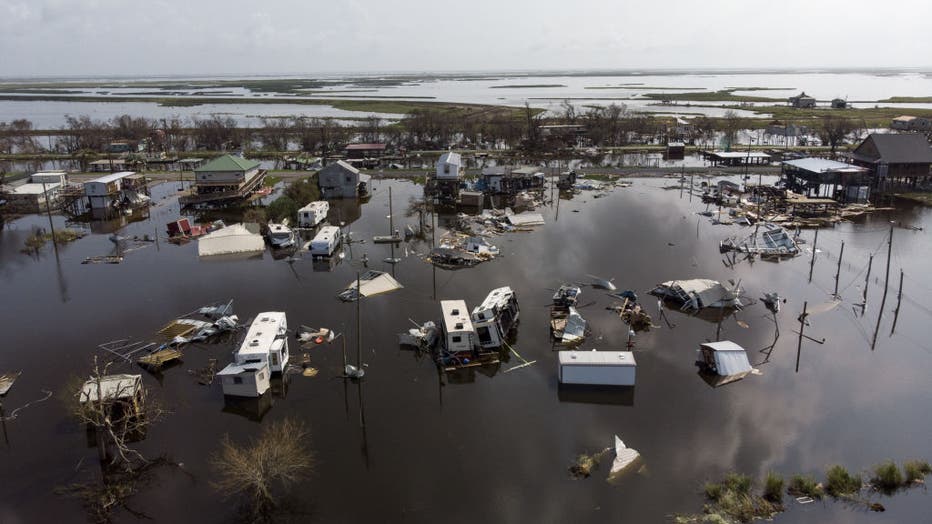 Damaged homes in floodwater after Hurricane Ida in Pointe-Aux-Chenes, Louisiana, U.S., on Thursday, Sept. 2, 2021. The electric utility that serves New Orleans has restored power to a small section of the city after Hurricane Ida devastated the regio

RELATED: Ida's aftermath: 1st lights turned back on in New Orleans as many wait for relief

Asked what type of assistance he planned to request from Biden, Edwards said, "Quite frankly, the list is going to be very, very long." But he said a priority would be for a housing program to help people rebuild.

Edwards said more than 220,000 people already have registered for assistance from the Federal Emergency Management Agency and 22,000 have applied for a federal program to place tarps on damaged roofs.

"It really pains me to see that people are hurting and their lives are upside down, and we’re going to do everything we can every single day to make things better," the governor said at a stop in Tangipahoa Parish.

RELATED: How to help victims of Hurricane Ida

More than 1 million homes and businesses in Louisiana and Mississippi were without power after Ida toppled a major transmission tower and knocked out thousands of miles of lines and hundreds of substations. New Orleans was plunged into total darkness at one point. Power began returning to the city on Wednesday, though almost all of the electricity in the city wasn’t expected to be restored until Sept. 8.

Not every customer will have power back in the city, utility Entergy said in a statement Friday. Customers with damage where power enters their home will need to fix it themselves, and there could be some smaller areas that take longer.

And there still is no concrete promise of when the lights will come back on in the parishes east and south of New Orleans, which were battered for hours by winds of 100 mph or more, Entergy said.

The city's main airport has reopened to commercial flights for the first time since the hurricane. Delta was the first airline to return, to be followed Friday by United Airlines and later by other carriers, officials said.

On Friday Biden also planned a flyover tour of hard-hit communities including Lafitte, Grand Isle, Port Fourchon and Lafourche Parish, where Parish President Archie Chaisson said 25% of the homes in his community of 100,000 people were gone or had catastrophic damage.

The president also planned to deliver remarks later that afternoon.

Meanwhile, the remnants of the system walloped parts of the Northeast, dumping record-breaking rain in a region that had not expected a serious blow and killing at least 46 people from Maryland to Connecticut. Eleven people in New York City drowned in basement apartments.

The remnants of Ida dumped so much rainfall on New York City in a few hours that dangerous flash floods quickly overwhelmed many streets, highways, subway stations, and homes.

In the aftermath of Hurricane Ida, Biden is grappling with the persistent threat posed by climate change and the prospect that disaster zone visits may become a more regular feature of the presidency.

"These extreme storms, and the climate crisis, are here," Biden said in a White House speech on Thursday. "We must be better prepared. We need to act."

President Joe Biden promised all the assistance that's needed in responding to the aftermath of Hurricane Ida and a massive wildfire in California on Sept. 2, 2021, in remarks from the White House.

On Thursday, he called for greater public resolve to confront climate change and said he will further press Congress to pass his nearly $1 trillion infrastructure bill to improve roads, bridges, the electric grid and sewer systems.

The proposal intends to ensure that the vital networks connecting cities and states and the country as a whole can withstand the flooding, whirlwinds and damage caused by increasingly dangerous weather.

RELATED: NYC flooding: What caused the sudden, severe deluge in the Northeast?