Police investigating a deadly wrong-way collision on I-45 Sunday night are struggling to put together a clear timeline of when and where that driver got on the interstate. She and two young children in her minivan died on impact. The other driver, a teacher from Palestine, Texas, also died.

WILMER, Texas - The North Texas police department investigating a deadly wrong-way collision on I-45 Sunday night is struggling to put together a clear timeline of when and where that driver got on the interstate and what actions officers took next.

The female driver and two young children in her minivan died on impact. The other driver also died. His two teenage passengers are still in the hospital.

The Wilmer Police Department on Tuesday has not released any new details about the crash and has not been able to say where the driver entered the freeway and at what time.

Jadyn Gonzales said she was driving on 1-45 Sunday night when she nearly crashed trying to avoid the wrong-way driver. She said she is thankful she is alive. 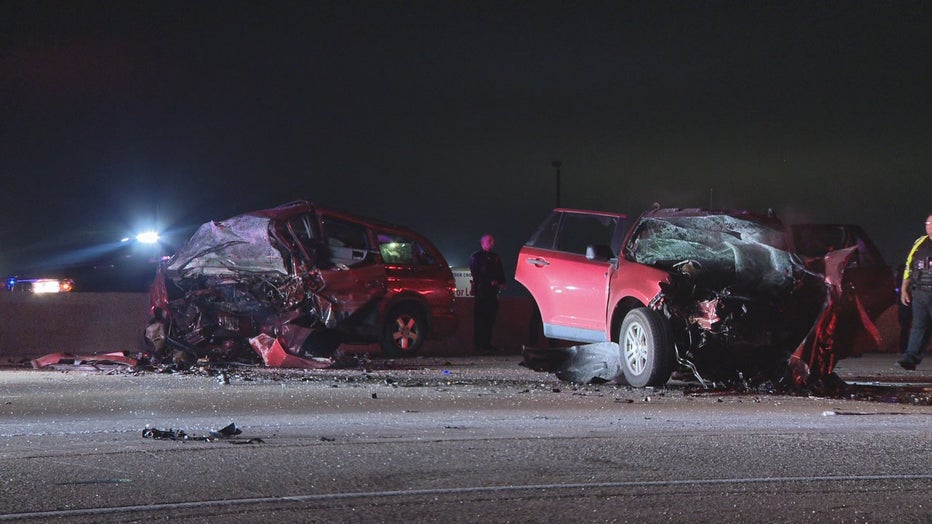 "I almost lost my life tonight to a person going the wrong way on the highway," she wrote on Facebook. "I was driving southbound a little ways past Ferris. And if it wasn’t for the car the little ways in front of me swerving into the third lane, it wouldn’t have caught my eye. I ended up in a ditch safely. I’m okay. My car is okay, and I can only thank God."

Gonzales said that’s when she called 911 south of Ferris. She said dispatch already knew about the wrong-way driver.

FOX 4 is working to find out when the first person reported the driver to police and also if police or sheriff's deputies had time to call on Texas troopers to help shut down the freeway.

Wilmer police say at 11:44 p.m. the driver going northbound in the southbound lanes of I-45 ultimately crashed into 28-year-old Michael Coyne, a husband and father of a baby girl.

Wilmer police say they received a call from Ferris police about the driver only two minutes before the crash.

The Ferris city manager said an officer on a narcotics stop saw the wrong-way driver and attempted to get her attention from the northbound lanes before witnessing the crash.

Coyne was a teacher and coach at Palestine Junior High School. He was traveling back to Palestine from Dallas with two students.

The father of one of the students gifted the tickets to the Mavericks’ game three as a way of helping his son after the tragic loss of his brother in a recent car crash.

The 33-year-old woman who was driving the wrong way, Francisca Fuentes, also died in the crash, along with two children with her: 2-year-old Gabriela Fuentes and 1-year-old Justino Jaimes. The child appeared to be unrestrained at the time of the crash.

The two teens with the coach are still in the hospital. Their injuries are not life threatening.