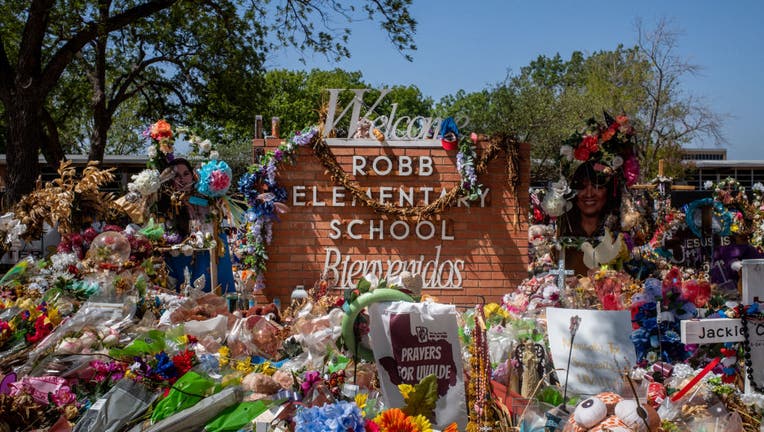 UVALDE, TEXAS - JUNE 17: The Robb Elementary School sign is seen covered in flowers and gifts on June 17, 2022 in Uvalde, Texas. Committees have begun inviting testimony from law enforcement authorities, family members and witnesses regarding the mas

UVALDE, Texas - On behalf of Uvalde mass shooting victims and their families, the California-based law firm Bonner & Bonner is seeking $27 billion from a litany of governmental entities over the May 24 Robb Elementary School massacre that left 19 children and two teachers dead.

As evidence of the school district’s responsibility, the claim pointed to a Texas House committee’s report that investigated the shooting as well as law enforcement’s response. The report, which was published a month ago, found that "systemic failures and egregious poor decision-making" contributed to the gunman’s ability to get inside a classroom and law enforcement’s delayed response in confronting him.

In addition to serving the school district and City Council, Bonner intends to seek damages from the list of law enforcement agencies present at Robb during the shooting and Daniel Defense, the manufacturer of the AR-15 the shooter used that day.

The claim, which could become a precursor to a class-action lawsuit, puts the would-be defendants of a potential suit on notice. Bonner said he hopes to reach a settlement ahead of the class-action suit, but if those parties don’t come to the negotiating table, he plans to file the federal lawsuit in September.

Bonner said the claim seeks to establish a medical monitoring fund to pay for counseling for those affected by the incident and further compensation for the victims of the shooting, their families and the other people in the school on the day of the tragedy.

As it stands, the class named in the prospective lawsuit covers nine families of shooting victims, but Bonner said he expects that more people impacted by the shooting will sign on moving forward.

"The theme of this invitation to negotiate is accountability, responsibility and justice, and that’s what we want for everyone in that class. We will leave no victim behind," Bonner said.

Anne Marie Espinoza, a spokesperson for the school district, did not respond to a request for comment Tuesday.